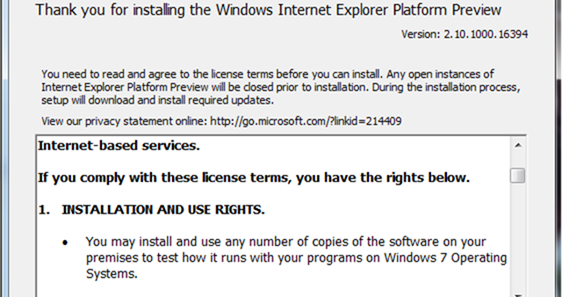 Both the release notes and installation process mention that the IE10 Platform Preview 1 requires Windows 7 32 bit or 64bit for installation. According to Computerworld, Microsoft also made it clear that when Internet Explorer 10 launches, only Windows 7 users will be able to install the latest version of the browser.

A Microsoft spokesperson notes the reasoning behind dropping Vista support in Internet Explorer 10 is to focus on innovation on a modern operating system and modern hardware. As market share for both Windows XP and Vista quickly fall, more and more products are likely to be limited to Windows 7.

Thanks to Mephistopheles for pointing this out on the forums!