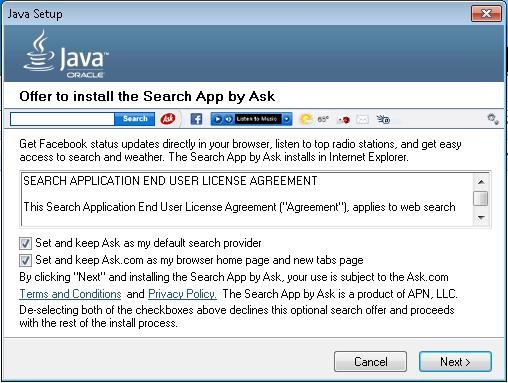 Many of us surf the internet via browsers like Internet Explorer, Mozilla Firefox and Google Chrome. With this in consideration, many of us are very likely familiar with "toolbars," which reside below the browser's address bar, and aims to provide "extra functionality" on our internet browsing experience. These software usually come as an add-on with other programs, and let's face it-- nobody really wanted them.

After the move of removing apps from the Windows Store to eliminate clutter, Microsoft seems to have taken an aggressive approach when it comes to computer security. Ask Toolbar, one of the most popular browser toolbars ever, which comes bundled with the installer for Java, has recently been flagged by Microsoft as malware.

The Ask Toolbar creates ten files and ten folders once it is installed on a user's computer. The toolbar is now considered as dangerous due to its ability to overrun the control of a web browser, and the capability to alter its settings. Antivirus and anti-malware software such as Windows Defender and Microsoft Security Essentials can now reportedly detect the toolbar, and remove it from a host's computer.

According to Microsoft's Malware Protection Center:

It is worth noting that only older versions of the Ask toolbar are considered as "unwanted software" by Microsoft, and not new versions.

In consonance with this information, Microsoft has confirmed to The Register that the current version of the toolbar is "compliant with Microsoft's policies," and that the toolbar will update itself every time a web browser it is installed in is opened.

It is not known if Microsoft will target more toolbar programs aside from Ask Toolbar.