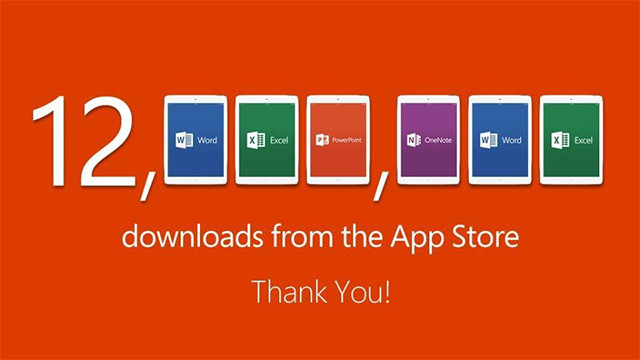 Microsoft released Office for iPad just a week ago, but the Word, Excel, PowerPoint and OneNote apps have already exceeded 12 million downloads from the App Store, the company revealed today.

The figure was revealed in a tweet from the official Office account, though figures weren't provided for each specific app, nor were sales resulting from the in-app Office 365 purchase option. The tweet also doesn't clarify whether OneNote's downloads prior to the Office for iPad's release were counted, as the note-taking app received a redesign in line with the new Word, Excel and PowerPoint apps.

Both Microsoft and Apple seem pleased with the interest in the new apps so far, with Microsoft CEO Satya Nadella and Apple CEO Tim Cook exchanging congratulatory messages on Twitter. The apps quickly skyrocketed to the top of the App Store downloads chart, with Word sitting at the top spot, immediately followed by Excel, PowerPoint and OneNote in the four most-downloaded top free apps chart within hours of release.