Microsoft has set an opening date of November 18 for its latest retail store, due to open in Bellevue Square next month.

The store is a fifteen minute drive from Microsoft's headquarters and company campus at Redmond, Washington. This is the software giant's fifth retail store, due to open two weeks after the highly anticipated Xbox Kinect launch. Windows Phone 7 will also go on sale on November 8, shortly before the store opening. Prior to the launch, Microsoft plans to donate up to $1,000,000 in software grant donations to two local organizations. The free software will go to First Robotics, focused on science and technology to inspire students, and Study Zone, an after school program where students receieve free computer training.

The new store will join the fourth Microsoft store, launched in San Diego. Microsoft also has the two stores located in Scottsdale, Arizona and Mission Viejo, California, and a third store in Park Meadows Mall - Lone Tree, Colorado. Microsoft is also planning to open two new stores in Chicago and Minneapolis, although opening dates have not yet been set. Microsoft stores are well known for being placed nearby or across from Apple's stores. The company is also planning a mega-sized store in the Mall of America later this year which is the biggest yet. The store will be placed directly opposite an Apple store.

The Microsoft Stores offer all of the Microsoft products found through online retailers and inside major retail chains, including keyboards and mice, Windows 7, Xbox 360 and many more products. Apple currently has 222 stores in the United States alone, and 287 total stores worldwide, including 27 in the UK and 14 in Canada. 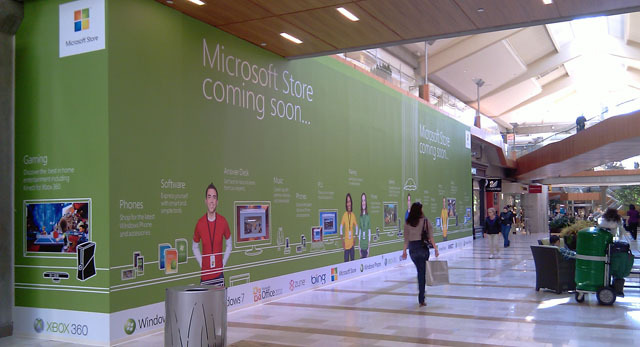