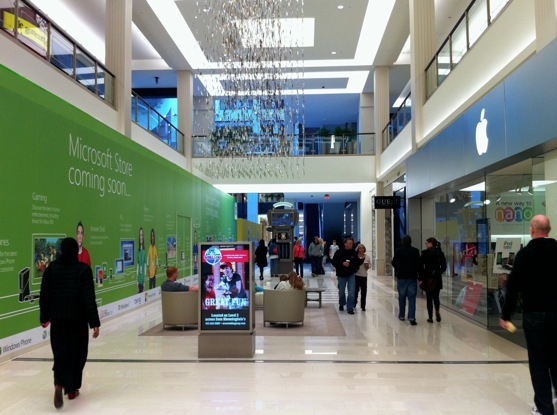 Microsoft is planning on opening up a mega-sized store in Mall of America later this year, and not only will this be their biggest store yet, they plan on opening it directly across from an Apple store. For Microsoft to compete against Apple's 300+ stores across the world, they need to pull out the big guns for this head-to-head battle.

This will be the fifth Microsoft Store to launch in America, with two already in California, one in Colorado and another in Arizona. Apple already has five stores in Minnesota alone, so this surreal showdown directly across from one another at Mall of America will be interesting.

It looks as if Microsoft plans on putting their best foot forward with this new store location, showing off their new electronics like the Xbox 360 slim, Kinect and Windows Phone 7. The Microsoft Stores carry all their electronics and hardware, including the Zune HD, Windows 7, Office 2010, and many, more products.

One user has posted a video of the new Microsoft Store location on YouTube: