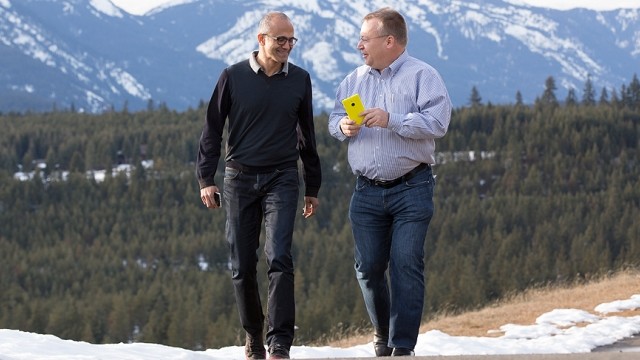 In a press release issued on Nokia's website, the company states the transaction was made with the recently announced adjustments, including Nokia's manufacturing plants in Chennai, India, and Masan, South Korea. Despite the minor adjustments, the "material deal terms of the transaction" remain unaffected, the release states. Microsoft is paying Nokia about $7.17 for the unit and the 10-year licensing of the Finnish company's patent portfolio.

As part of the deal, Nokia is prevented from making smartphones until 2016.

Microsoft was less formal about the announcement, releasing a story with the bold title, "Microsoft, Nokia Devices and Services business aim to remake mobile market." The deal means Microsoft will be able to accelerate its growth in the smartphone market, the company says in the story, while also allowing more cohesive development of Windows Phone.

“We have been planning for [increased efficiency], we have been learning about how each other does it, we have been going through and assessing who has the best tools for which part of the business and then how do we put those together so we take the best of both worlds, and now we get to start acting on it,” said Tom Gibbons, the Microsoft corporate vice president who oversaw the transaction.

Stephen Elop, Nokia's former chief executive who will now head up Microsoft's devices unit, called the transaction the start of a "long-term journey" in an open letter published on Nokia's website, saying Microsoft and its newest employees "will unify our passion, dedication and commitment to bringing you the best of what our joint technologies have to offer."

Microsoft has a tough road ahead of it, with about 25,000 new employees to integrate in its business and a significant gap to make up between its operating systems and Google's Android and Apple's iOS. Windows Phone has shown growth, however, with the operating system now accounting for more than 10 percent of devices in the top five European markets.