Adam Orth, a creative director at Microsoft Studios, went on Twitter on Thursday to offer his opinions on the "always on" game console topic, in the wake of recent rumors that Microsoft's next version of the Xbox would have to be connected to the Internet to play games. His statements generated a lot of negative responses from Internet message boards, as he suggested that people should "#dealwithit" in terms of thinking about a game console as "always on". 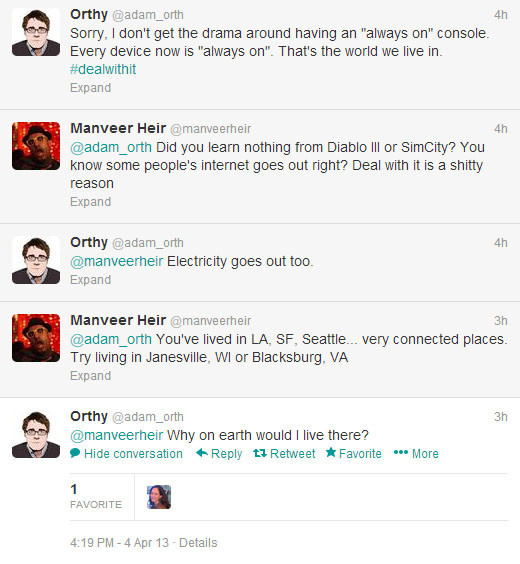 While his statements were never thought of as "official" comments from Microsoft, the company later issued an apology for Orth's Twitter statements, calling them "inappropriate." Orth quickly made his Twitter account private. Following that news, Game Informer reports, via unnamed sources, that Orth has since left Microsoft.

It's currently not known if Orth voluntarily decided to leave, was asked by Microsoft to resign or was fired outright. Orth was hired by Microsoft early last year, but it is not publicly known exactly what game project(s) he was working on in the Microsoft Studios division. He previously worked at PopCap Games and LucasArts, among other game publishers and developers.

Microsoft did not comment on whether or not the next Xbox would indeed require an Internet connection to play games when it issued its apology last week. New but unconfirmed rumors that popped up today claim that the console will require a constant Internet connection so that it can be set up to work with television set-top boxes, though no information about an always-on connection for gaming was reported in that rumor.