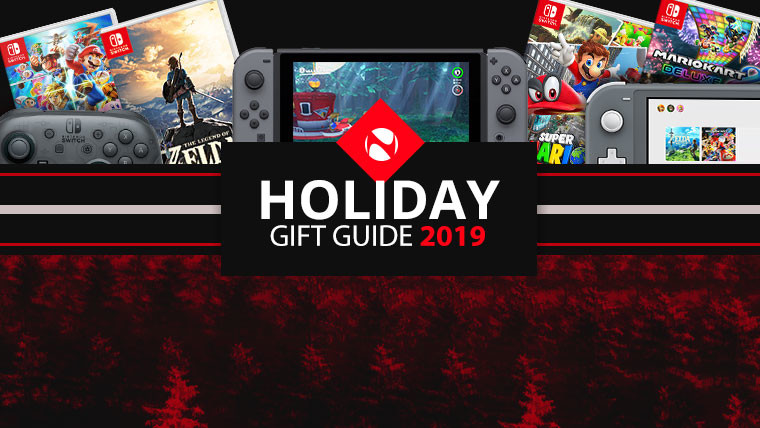 Just like that, we're already closing in on this year's holiday season, and for many people, that means it's time to start thinking about buying gifts. Whether it be for your loved ones, family, friends, or even yourself, this is the time of the year when you'll be spending a lot of money, and we want to help you spend it wisely.

This is Neowin's holiday gift guide for fans of Nintendo games, so naturally, it's mostly focused on the Nintendo Switch, However, if you're on an especially low budget and you know someone who has a member of the Nintendo 3DS family, we'll have some game recommendations for it at the end.

Disclaimer: Prices for products on Amazon are for products bought in new condition directly from Amazon, which is our recommendation. Prices from third-party sellers may be presented by default on Amazon's website. Additionally, for games, prices are for the physical version when available.

The Nintendo Switch has been out for almost three years now, but this year got a refreshed model that's much more power-efficient, which means it will last a lot longer on a single charge. If you haven't bought a Switch yet, this is the model you'll want to get, and it completely replaces the previous model, so it costs the same as before.

We also got the Nintendo Switch Lite, a cheaper, smaller version of the Switch that can't be connected to a TV, and we actually quite liked it in our review. If you're planning to use the Switch exclusively in handheld mode, the new Switch Lite is a fantastic option, and you can get it in either gray, yellow, or turquoise. There's also a special edition for Pokémon Sword and Shield which is just gorgeous and costs the same as the other models.

For Black Friday, Nintendo is selling a Nintendo Switch bundled with Mario Kart 8 Deluxe for $299, which means the game is basically free. However, this is the old Nintendo Switch model without the battery life improvements. The deal starts on November 28 and runs while supplies last.

One thing you're most likely going to need if you own a Switch is a Nintendo Switch Online subscription, which is required if you want to play games online. Another thing that might be useful is a Nintendo eShop gift card, so your gift's recipient can buy games of their choice in digital format.

Of course, the whole point of owning a gaming console is to have games for it, and there's no shortage of great games on the Switch. Below are what we believe to be must-have titles, though it's ultimately up to personal preference. From November 27 to December 1, to celebrate Black Friday, Nintendo is slashing $20 off the MSRP for select games. This means they will go for $39.99 instead of $59.99 while supplies last - a big discount considering Nintendo games don't go on sale that often.

The Legend of Zelda: Breath of the Wild ($43.99) - One of the launch games of the Switch, but still one of the best games on it, it's very likely that anyone who owns a Switch already has this one. If they don't, it's almost impossible to go wrong with it. Breath of the Wild is the first open-world game in the Zelda franchise, and it's also the most expansive ever. It's incredibly easy to spend hours roaming around this world, and very hard to dislike this game. If the base game doesn't offer enough content, you can get the $20 Expansion Pass, too.

Super Mario Odyssey ($44.99) - This game can almost be seen as the Breath of the Wild of the Mario franchise. It's one of the most unique Mario games in a long time, with the titular character being able to take control of enemies and objects with the power of his hat. It also gives you quite a bit to do, especially if you get into the online-based Balloon World mode. It's also one of the earliest Switch games, but it's just impossible not to recommend it given how good it is.

Mario Kart 8 Deluxe ($49.94) - Mario Kart is another franchise that makes for a great game to play with friends, either online or locally. It's a bit more accessible than Super Smash Bros. Ultimate, so it's easy to enjoy even if you're playing with people who don't play games that often.

Super Mario Maker 2 ($49.99) - Classic 2D Mario gameplay combined with level creation tools for players makes for a never-ending amount of levels to choose from, many of which make use of items in much more creative ways than Nintendo-made levels would. Unlike the original Super Mario Maker, the sequel also has a story mode, so there's content even if you can't play online. You can also get it bundled with a Nintendo Switch Online subscription, which you'll need to play online.

Astral Chain ($57.99) - PlatinumGames has created yet another Nintendo-exclusive game with incredible action sequences, great animations, and a beautiful art style. Astral Chain may not be a game for everyone, but it's an absolutely fantastic title, as you can see from our review earlier this year, and it's hard to pass up if you like action games.

Ring Fit Adventure ($79.99) - It's not everyday that a videogame combines physical exercise with a single-player adventure and RPG elements, but Ring Fit Adventure does it wonderfully. This game will make you sweat a lot, and it'll motivate you to keep going, which is great if you want to stay active and don't have that much time to exercise outside your house.

Luigi's Mansion 3 ($59.99) - Mario's oft-overlooked brother doesn't get many games for himself, but the Luigi's Mansion franchise sees the shy green-clad hero make his way through houses full of ghosts. Seven years after the second game in the series, Luigi's Mansion 3 offers the most expansive adventure yet, with a distinct charm and variety of gameplay mechanics that keep the game interesting all the way through, and it's impossible not to recommend.

Pokémon Sword and Pokémon Shield ($59.99 each)- Almost any Pokémon title is fairly easy to recommend for Nintendo fans, and Sword and Shield introduce some of the more interesting changes yet to the franchise. They introduce a free-range movement zone called the Wild Area, new mechanics like Dynamaxing, and, of course, it marks the start of a new generation of Pokémon games, which means there's new creatures and a new world to explore.

If you already own all of those games, or they don't really suit your taste, here are a few other great options you might like:

At this point in time, we don't recommend buying a Nintendo 3DS as a gift, since development for the platform has basically ended. However, if you're buying for someone who has one, many of Nintendo's best games on the 3DS are now part of the Nintendo Selects collection, which means they cost just $19.99 brand new. They may be a good choice if you have a small budget. Here are some options:

With all those options, we're sure you'll find something that suits your tastes. Happy holidays!