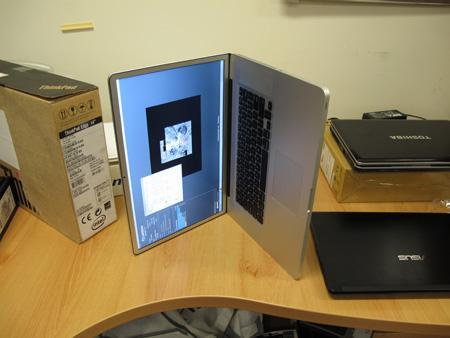 Apple finally put out new MacBook Pros earlier this month, but the launch with Intel’s latest processors hasn’t come without a few problems. PC Authority’s hands on testing with the new 17” MacBook Pro found that the internal Core i7 topped out at around 100 degrees Celsius.

The computer review company found that when performing various benchmarks with the laptop, the processor generated so much heat that they had to stand the MacBook Pro on its side in order to complete their testing. (as pictured above) Testing in both Mac OS X and Windows cranked up the heat output to over 100 degrees.

The 2.66 GHz Core i7 620M inside the laptop reached 84 degrees in the Dwarf Fortress graphics benchmark and 100 degrees in the Cinebench 3D rendering benchmark. For comparison, they tested a Fujitsu Lifebook SH760 that used the same processor and found that it only reached a maximum of 80 degrees and kept cool to the touch thanks to its thicker plastic casing which allowed for greater airflow and a larger copper heat sink.

Engadget’s own testing found that the new MacBook Pros were actually cooler than previous models in real world usage, so new owners should not worry too much. They do recommend that Apple should consider sacrificing its low noise output when the CPU gets worked though, as it can get toasty at times.