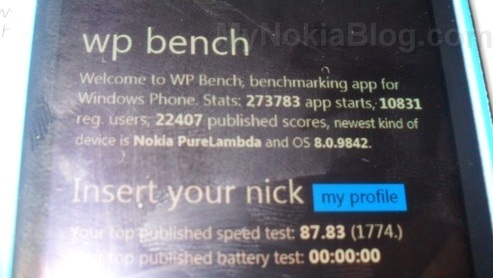 It's not a shock to learn that Nokia is working on some upcoming smartphones that will be running on Windows Phone 8, also known as "Apollo". Today the fan site MyNokiaBlog.com reports they have received photos that seem to show at least one unannounced Nokia device that's now running Windows Phone 8.

One of the site's readers was using the WP Bench software on his Lumia 800. The photo shows that one of the smartphones that also used that same app has the OS version number 8.0.9842, which would seem to confirm that someone at Nokia is testing the still unannounced next version of Microsoft's mobile OS.

All of these names could just be code words; they may not represent what the final version of these products will be called by Nokia when they are released. However, it would appear that Nokia has quite a few future Windows Phone devices that are currently undergoing some testing.