With Nokia throwing around game changing Windows Phone Devices like the Lumia 925 and 1020, it may be easy to forget that other Windows Phone OEMS like Huawei, HTC and Samsung have devices and ecosystems of their own. After releasing the critically acclaimed but poorly marketed Ativ S and it's variant, the Ativ S Neo, Samsung seems poised to reveal another device this fall.

The device code-named  SGH-I187 is not connected to any currently existing Samsung models and is likely to be a new product in its own right. 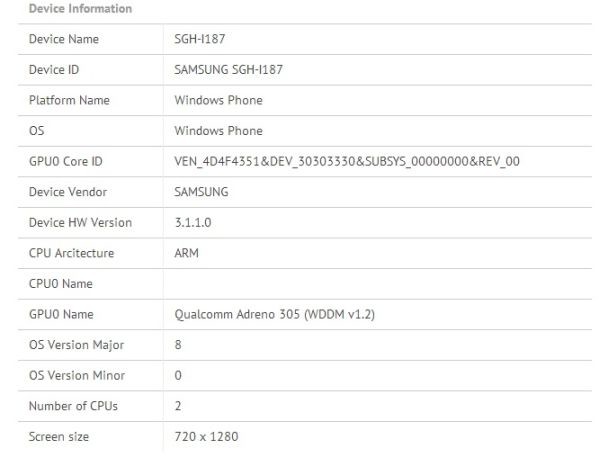 Specs according to GFXBench.

While it is not unlikely that this device could be unveiled on September 4th at IFA, it doesn't appear to launch with GDR3 hardware improvements and may in fact be a mid range Ativ Odyssey successor rather than the new Ativ S2 which should ideally be a variant of the Galaxy S4. Otherwise, this device is set to compete-albeit disastrously-with the rumored HTC and Nokia flagships coming later this year with vastly superior specs.