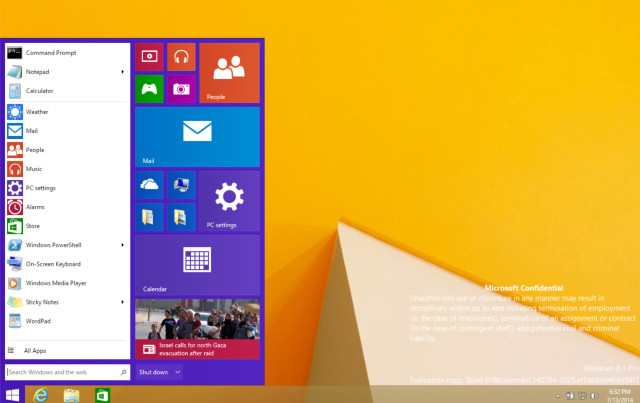 Well, it looks like the leaks are starting to flow - or else someone has decided to spend an unhealthy amount of time building an elaborate Start menu replica. As you can see in the image above, the Start menu is there but it's not all that exciting as we have seen most of this before.

We do know that this is still an early build of next generation of Windows and we will have more to report on that tomorrow. So, don't get too caught up in the minor details as there will be other enhancements to the desktop before Threshold is released.

One item about the image that was throwing off users previously is that is says Win 8.1 Pro in the bottom corner. We have spoken to a source close to Microsoft who says that this image appears to be legitimate, and that these builds inside of Microsoft still use this branding, so this is not a big deal.

This build 9788 is said to be floating around the web but has not been properly leaked for all of us to enjoy. Considering that the images are starting to surface at various points across the web, the build will likely leak in the near future.