Twitter user FireCube is pretty popular on the social media site since they would often leak upcoming features or post some interesting Windows stuff. But everyday is not the same and today is definitely not such a day. That's because FireCube has posted a fake screenshot of a supposed upcoming Windows 11-based "EdgeOS" Beta. Bear in mind though that this is intentionally faked and not meant to mislead as EdgeOS being a real competitor to Google's Chrome OS.

In the Twitter post, FireCube has added some description for it saying "LEAKED Microsoft plans rebrand of Windows 11 after switching to new web based tech powered shell" with the following image attached to it: 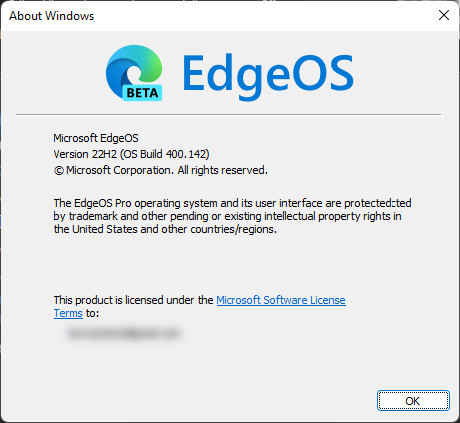 The screenshot is an edited version of a winver window that looks like it was slapped together pretty quickly, as they missed correcting the end of the first line, and the build number does not even line up or space properly, even though this is only meant as joke.

And while it is just for the banter, Microsoft's recent actions related to its Edge web browser feature-set actually does make an "EdgeOS" pretty believable. That's because the Redmond giant has been adding a boatload of additional and perhaps unnecessary features into Edge over the last couple of months, making it sort of a mini OS in itself.

So far, the company has added an entire sidebar that contains a calculator, unit convertor, as well as Photos app and even links to the entire office suite and the Outlook calendar. And it is also a gaming browser now, "the best" out there according to Microsoft. And it's possible more such features would be added later too.