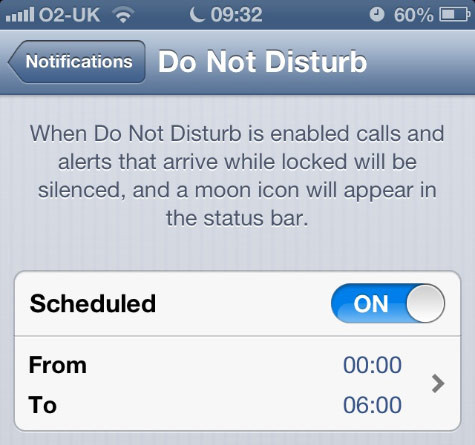 2013 has arrived and with it comes the first minor, but still annoying, software bug of the new year. A number of iOS users are reporting that their Do Not Disturb feature was still switched on even if the scheduled time for DnD to be turned off came and went on this New Year's Day.

Engadget reports that there is no software download yet to fix this small problem so if you have DnD on and found that it is still enabled on your Apple product, your best bet is to simply disable it until the company comes up with an official fix. This latest bug does not affect the alarm clock feature in iOS 6.

Apple experienced a similar glitch on New Year's Day in 2011. That bug prevented the clock from activating the alarm. It appears that Apple has figured out how to fix that bug from happening in iOS 6 at the expense of failing to detect this new DnD issue.

In any case, you do have to wonder why these kinds of New Year's Day software issues continue to get past Apple programmers. Hopefully 2014 will be better for iOS 7.