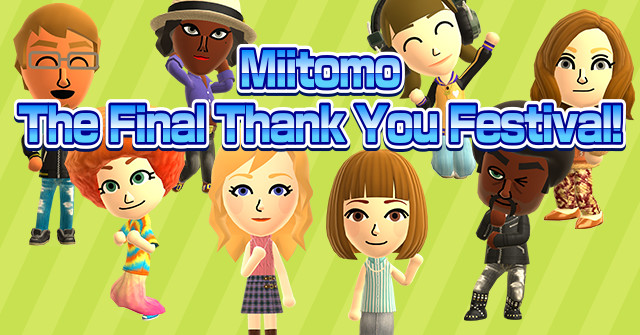 Miitomo was first announced by Nintendo back in October 2015 as the company's first smartphone game. To the disappointment of fans of the Mario, Metroid and Zelda franchises, the game did not feature anything from them, but rather a social experience in which users could create and customize Miis - animated avatars that were first introduced on the Wii console.

The app was made available on iOS and Android in March 2016 with claims from Nintendo that it was downloaded more than a million times in the first two days following its release in Japan. But now, almost two years later, the company has announced the end of Miitomo.

As of this Wednesday, the sale of Miitomo coins was suspended in the service and on May 9, at 12:00 AM (PDT), the entire service will be shut down.

In order to thank those who have supported the app, Nintendo has also announced the "Miitomo Final Thank You Festival". Until the end of the service, the company will offer daily login bonuses of 2,000 Miitomo coins and five game tickets so users can still enjoy the entire service. Also, it is encouraging users to share fun memories from Miitomo by tweeting their favorite Miifotos.