On it's blog, Opera makes the claim that without bloated ads "some top websites" would load up to 90% faster. Following that vague statement, they go on to make the announcement that they have included native ad-blocking in their developer channel version of their desktop web browser. This is quite a major achievement, as none of the top four browsers currently offer that functionality without extensions.

Opera claims that by running the ad-blocker at the web engine level, they can achieve speeds unmatched by extension based ad blocking and have included some in-house benchmarks that highlight that. They show that Opera's native ad blocking allows website's to load 21% and 45% faster than Firefox and Chrome running Adblock Plus, respectively. 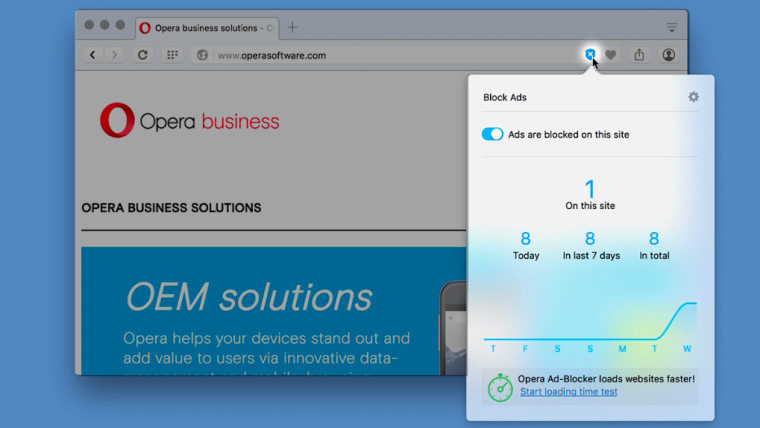 They have also included the granular controls that will be required to make their solution competitive, with the ability to white-list sites, view statistics on how many ads are blocked on a page, and the ability to benchmark specific pages with or without the ad-blocker enabled. Currently, the block list being used is from EasyList and is configured to stop both advertising and trackers.

Opera has invited comments on their blog for users to highlight their results with the native blocking. The results are mixed to say the least. Many users are pointing out that Adblock Plus is a very slow solution to benchmark against, and that other solutions like uBlock allow for even faster browsing than Opera.

There are also a number of bugs highlighted by users. In the first few hours after release, many of them centered around YouTube ads.