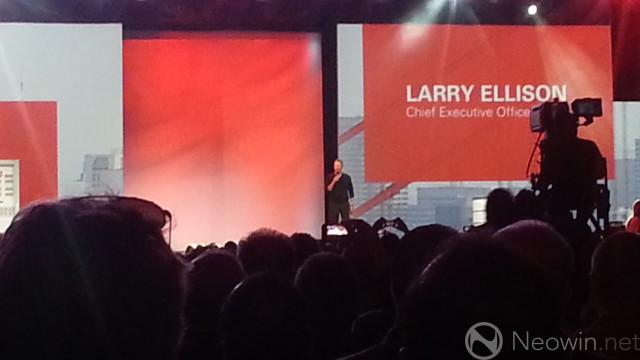 Larry Ellison kicked off Oracle OpenWorld with his annual keynote, and we covered it with a live blog earlier tonight. Noriyuko Toyoki, SVP of Fujitsu, started things off for the first hour, and the crowd was unimpressed. The energy levels in the arena increased once Ellison took the stage as he made the company's product announcements. 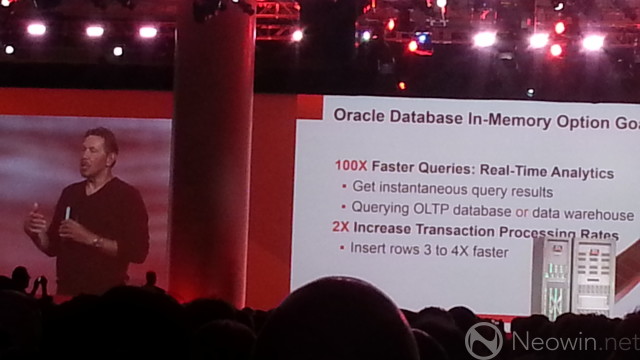 The first announcement was the most important: In Memory Option for databases. While initially we thought this was simply pinning tables in memory, something that's been possible for years, it turns out that isn't the case. According to Ellison, this new method not only runs things in memory, but also stores the data as both a row and a column. Transactional statements run faster on row-based data, whereas analytics run faster on column-based data. While it's a little confusing how that actually increases performance, Oracle has some magic sauce that provides the following performance benefits: 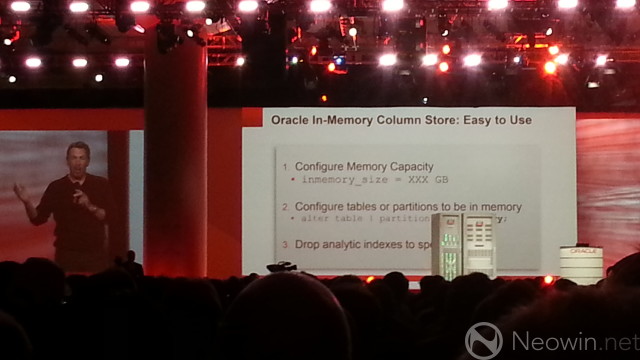 Oracle also announced the new M6-32 server, the "Big Memory Machine." This server contains 32 M6 SPARC processors, each with 12 cores, 96 threads, and 3TB/sec bandwidth. Compared to IBM's P795, this machine has twice the memory capacity, 50% more cores and twice the bandwidth at roughly 1/3 of the cost. However, Oracle licensing costs were not discussed. This was the machine that Oracle was running their Wikipedia test on, and it's available now, although pricing was not mentioned and is not available on the website.

This has to be the device with the worst name. Ellison: I came up with the name, that's why I make the big bucks. iPhone? Pfft, that's a boring name."Larry Ellison quipped that it was a terrible name but that he named it and that's why he makes the big bucks. He also joked that the iPhone is a boring name in comparison which drew a laugh from the crowd. The appliance itself is designed to backup thousands of databases. Whereas other appliances backup at the file level, the Oracle Database Backup, Logging, Recovery Appliance (ODBLRA?) backs up at the transaction layer. While Ellison didn't dig into the deep technical details, he explained that transaction logs are sent to the appliance and can be done in the same datacenter or across a WAN to a remote one. Two appliances can also be setup to replicate between themselves.

Datacenter of the Future

Ellison ended the keynote by discussing the datacenter of the future. He noted that everyone loves buying the cheap two socket Intel servers, installing virtualized Linux on them, and connecting them via wired Ethernet. He stated that they're cheap, but are not good for every workload, emphasizing that Oracle's engineered systems are still very important. We found this to be an ironic statement, considering the Exadata platform currently runs on Intel Linux servers, albeit with Oracle's Flash Cache technology and special software.