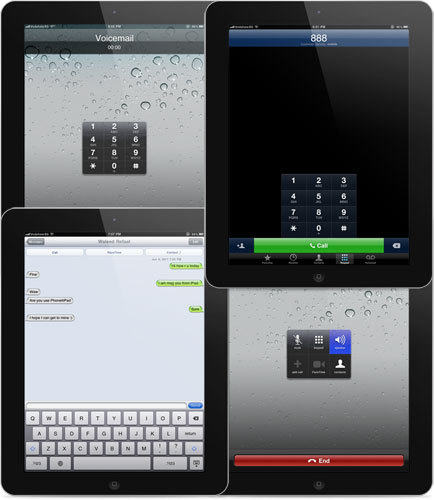 So, for everyone who desperately craved the ability to use their iPad 3G as a phone, you now have the opportunity to thanks to the iPhoneIslam team. The guys, who were previously responsible for enabling FaceTime on the iPhone 3G, have discovered a way to use a jailbroken iPad’s inbuilt 3G radios for some calling and texting using your SIM card.

The app is called PhoneIt-iPad and is available for $20 via Cydia. All it requires is your jailbroken iPad to be an original model running iOS version 4.3.3, and for it to have a normal phone SIM card inside. The iPhoneIslam team note that pre-inserted data-only SIM cards that you may have got from a carrier such as AT&T will (obviously) not work as they are data only. The app doesn’t support MMS at this stage, but most other phone features should be enabled, allowing you to turn your iPad into a massive phone.

The video of the app in action is below and shows both an iPhone 3G and iPhone 4 receiving calls from the app running on an iPad, and also the iPad receiving calls from an iPhone along with carrying out an SMS conversation. Beware though as the camera used is perhaps not the best quality and the guy using it seems to have a knack for creating some shocking feedback.