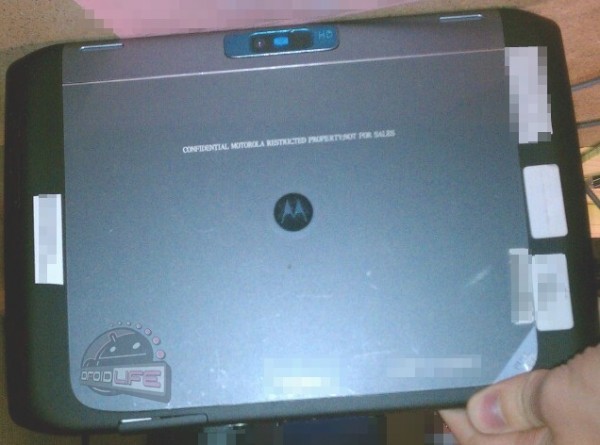 The tablet wars are only just beginning and companies know that there are huge margins to be made in this new segment. Everyone wants to chip away at Apple’s lead, so it seems that everyone is getting into the tablet market. Motorola was first out of the Honeycomb gate with its Android-based Xoom tablet in February but the sales numbers were rather disappointing, leading many to suspect that Moto would scrap any further plans. However for months rumors have been swirling about a Xoom 2 tablet and it appears that Droid Life has the first leaked photos of the new slate.

The pictures don’t show much, but the source of the leak claims that the tablet is roughly the same weight as the original Xoom, has an HDMI and micro USB port, and a SIM slot: In other words, it’s very similar to the current generation tablet. On the negative side, the Xoom 2 apparently does not have an SD card slot; a curious thing to remove given that support for the cards was just recently added to the Honeycomb operating system. There’s no word on what processor the Xoom 2 has inside.

Motorola has not made any comments on the leaked pictures and there is currently no scheduled release date for the new tablet, although rumors say that it may be released before the end of the year. If so, that would put the release at a mere nine months after the first tablet, something that could anger early adopters.