Photographs taken for Google Street View in Los Angeles show a pigeon giving its own opinion on the service in the latest comedy mishap caught by the service since its launch in 2007 - and apparently it isn't too pleased with the service, as it has defecated on the car.

Allowing people to view a road from ground level, the controversial Street View car has caught a variety of weird and humorous things with its roof-mounted 360-degree camera, since it was launched in May of 2007. In this year alone, Street View has hit a bridge, been pulled over by the police, used to promote a musician's music and even ripped a hole in the space-time fabric.

Although the faces of people and number plates are automatically blurred, the service has continued to be a subject of concern for human rights campaigners, who believe the service is a threat to people's privacy. There are also concerns that pictures taken by the service could be used by criminals to plan crimes. However, users can report inappropriate photos to Google, or request pictures of their own houses be removed.

Pictures of a cycling accident, a man vomiting and a man leaving a sex shop were all removed after complaints. 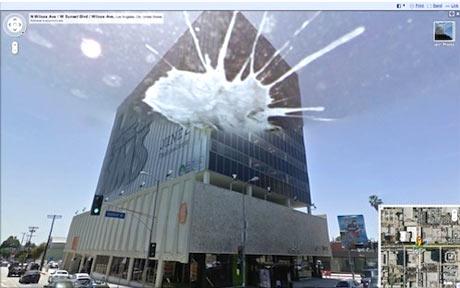