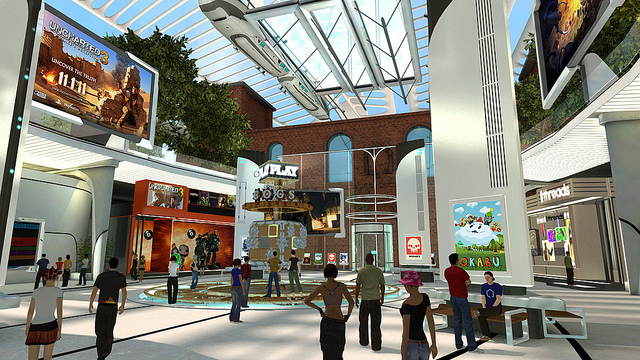 Sony's Playstation Home was first launched in late 2008 for the Playstation 3 console. It was, and remains, a free 3D virtual world where PS3 gamers could chat with each other, purchase in-game items for your avatar and your own virtual apartment and play games and demos inside the world. It was launched at the time that Second Life was supposed to be the "next big thing" to bring people from around the world together in a massive 3D world. However Playstation Home suffered from long download and load times along with other issues and didn't become as popular as perhaps Sony wanted it to be.

Today Sony announced on the official Playstation blog site a new revamp of Playstation Home that will be launched later this fall for PS3 owners. The new world will center around a new Hub (pictured above) along with sub districts that are designed around particular game genres. For example, the Action District looks like a gritty urban environment for first person shooter fans while the Sportswalk looks like the outside of a pro sports stadium.

In addition to the new Hub and Districts, Sony is pledging to make getting into Playstation Home easier with a separate update that will have a "streamlined initial user experience".  Finally the Hub will feature a new Activity Board that will turn Playstation Home into more of a quest-like game experience. The blog states, "From frequently updated community activities to huge, branching narrative adventures, this questing system will provide game play options delivered to you in ways never before imagined."