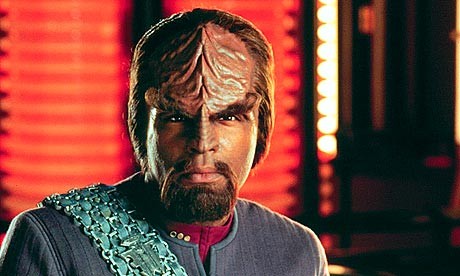 Worf is a proud Klingon today.

We have seen a lot of Microsoft-related activity for the upcoming film Star Trek Into Darkness, including Star Trek movie apps for Windows 8 and Windows Phone 8. Later today, we may get one of the coolest movie promotions of all time with the addition of the Klingon language to Microsoft's Bing Translator.

The LA Times website states that when the support officially goes live later today, the Bing Translator will be able to turn any word or phrase in its 41-language library into Klingon and vice versa. In addition to the Bing Translator website, the Klingon language will also be added to Microsoft's Windows Phone application.

The language of Star Trek's warmongering aliens was first developed by linguist Marc Okrand after listening to a few words that were made up by actor James Doohan for Star Trek: The Motion Picture in 1979. Yes, the actor who played the original Scotty is also technically the creator of the Klingon language, but Okrand used Doohan's words and sounds to create a proper language that was first used in Star Trek III: The Search for Spock.

Microsoft consulted with Okrand for its Bing Translator Klingon project, along with Microsoft engineer Eric Andeen, who actually speaks the language. Craig Beilinson, director of communications for Bing, stated, "We have people who understand the deep science of linguistics and we also have people who are passionate about the Star Trek franchise. This was a labor of love from a lot of different avenues."

We hope you'll join us in drinking a barrel of blood wine to celebrate this news.