Razer is by all means a juggernaut in the gaming industry, being especially well known for their computing peripherals. They've delved​ into tablets, custom high-end laptops, headphones, mouse pads, and even have a fairly extensive clothing range available for purchase for the die-hard enthusiasts... and there are lots of them. When it comes to mechanical keyboards, Razer happens to be the most famous and widely stocked mechanical keyboard brand there is; many mainstream computer stores only stock Razer's line of mechanical keyboards.

However, being the largest and most popular keyboard manufacturer doesn't mean that they are the best... in anything... when it comes to mechanical keyboards. Their keyboards are overpriced, they're oversized, and they're available in arguably the worst possible switches that gamers could use (Cherry MX Blue and Cherry MX Brown). In fact, the only reason those switches were offered were because Cherry MX Blue switches have a distinctive loud click when they actuate, accompanied by a fairly strong tactile bump, making them fairly noisey and marketable. This type of switch is preferable for typing, however, it's far from favorable when you want to spam a key quickly when gaming, which is what could be done with the much more gaming-suitable linear Cherry MX Red switches. Some people do however swear by Blues, and ultimately its all up to user choice and preference.

But that's enough ranting today, and lets focus on the news at hand. 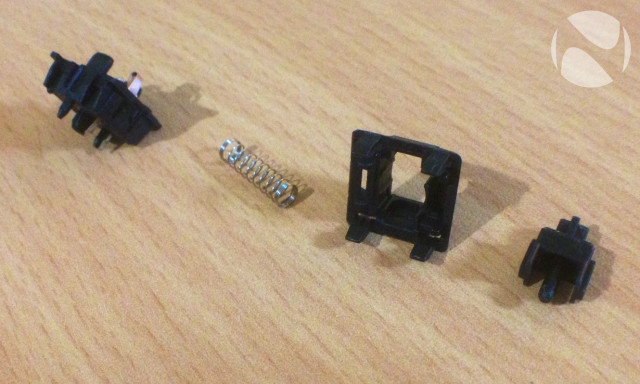 This photo shows the various components inside the linear Cherry MX Black switch,

Cherry MX clones are not uncommon-- they've been made for years. Everything from blatant rip-off fakes presented as original Cherry MX switches, through to popular Chinese clone switches from companies like Kailh that are gaining attention and acceptance from mainstream manufacturers such as MAX Keyboard.

The switches are being released into two variations, described as "clicky" and "silent," and being called "Green" and "Orange" respectively.

This shows the Razer "Green" switch variant's specifications being compared against some "standard mechanical switch."

The major difference between typical Cherry MX switches and Razer's new switches seems to be that the switch shaft sits slightly higher than the Cherry switches, and the pins are situated slightly above where they would typically be positioned. Whether this would have any noticeable effect in gaming is anybody's guess, and no-one would really be able to tell until they try them. As it stands, the switches serve two important factors:

Whatever the case may be, this is an extremely positive move for the keyboard world. It introduces a new element of competition and innovation, as well as greater variety and switch selection for end users. Based on how Razer is presenting their switches, they may very well turn out to be the greatest gaming switches ever made, and most gamers and keyboard enthusiasts likely can't wait to get their hands on them. Regardless of Razer's excessive branding and attempts to appeal towards a very mainstream element of computer users, they are still investing time and money into technology for what was an otherwise fairly stagnated market, which I'm sure no-one can view as being anything other than a wonderful contribution.

Author's note: Over the next few weeks I'm going to provide an in-depth look into mechanical keyboards, covering everything from the various switch types, manufacturers, layouts, and customization (including some background on why my plastic ESC key costs more than its weight in gold, and why I can sell it for that price at the drop of a hat). There should be a bunch of switch tester giveaways throughout the series, so look out for it!