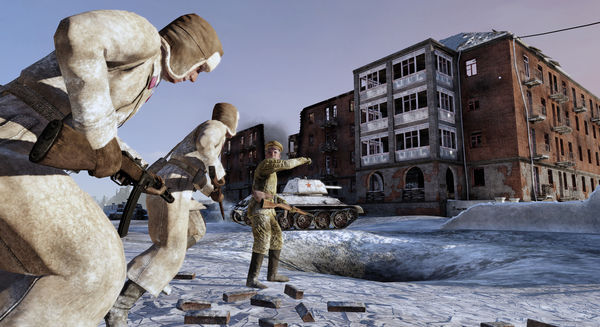 After a long wait, fans of the cult hit PC World War II themed first person shooter Red Orchestra 2 will finally be able to download the sequel, Red Orchestra 2: Heroes of Stalingrad, on August 30 via Steam. However, people who decide to put down their money early on the game will find that they will be getting a number of pre-order bonuses, including some in-game items for two other games.

The official Red Orchestra 2 web site has posted up word of the pre-order extras. Anyone who buys either the standard version ($39.99) or the Digital Deluxe version ($44.99) of the game before August 30 will get a 10 percent discount off the full price. In addition players who pre-order the Digital Deluxe version will be able to enter the final closed beta test for Red Orchestra 2. They will also get day 1 unlocks for four in-game weapons ( the MKb 42(H), the AVT-40, the SVT-40 and the G 41(W)). Pre-orders who own Valve's free-to-play shooter Team Fortress 2 will get access to German and Russian hats for Team Fortress 2 characters. Finally, owners of Tripwire's last game, the zombie themed shooter Killing Floor, will gain access to two new in-game characters, the Russian and German Soldier Re-enactors.

But that's not all. In an attempt to reward fans of the original Red Orchestra game, owners of that title will get an additional 10 percent discount for Red Orchestra 2, cutting the price down even more. Those gamers will also get two more day 1 weapons unlocks (Kar98 and Mosin rifle bayonets) and two unique in-game badges: the Russian Guards Badge and German Close Combat Badge.