Google has already shown in its own transparency reports that the number of takedown notices it gets to remove URLs from search results has skyrocketed in the past few years. Now a new report attempts to go back in time a few years to show just how much that kind of activity has increased. 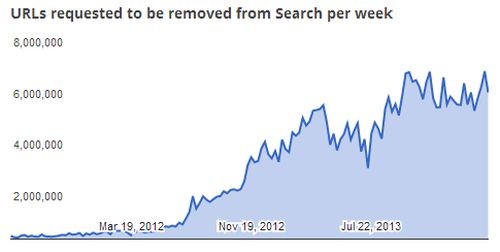 Google's own numbers show just how many URL removal requests it has been getting in the last couple of years.

The report was authored by Stanford Law School’s Daniel Seng, and posted on the Social Science Research Network website. In his study, Seng says that the number of DMCA (Digital Millennium Copyright Act) takedown notices that Google received increased from just from 62 percent in 2008 to 441,370% in 2012. That's a surge of 711,887 percent in a span of just four years (and no, that's not a typo).

Seng feels that the wording of the DMCA could be updated to not allow for the bundling of multiple unrelated claims in one takedown notice. He states:

Disallowing multiple claim notices does not mean that the parties cannot file multiple claims. They can still do so, but not by way of filing all these in one notice. The correct way is to file separate notices for this purpose. Any inconvenience from re-entering the required formalities data should be solved by using input convenience tools for this purpose, and not by conflating multiple notices.

However, it seems likely that Google will have to continue to deal with increases in the number of copyright takedown requests for the foreseeable future.