Despite the fact that Resistance 3 was destined for release on September 6th, one lucky gamer has managed to get the game early. Resistance 3 only recently went gold, though the lucky gamer has boasted of his success via Reddit. Going by the Reddit username of 'jearbear', the user posted an image of him holding his copy of the game's box, as well as the title screen in the background. It's hard not to be jealous, but jearbear was kind enough to provide some thoughts on the game. 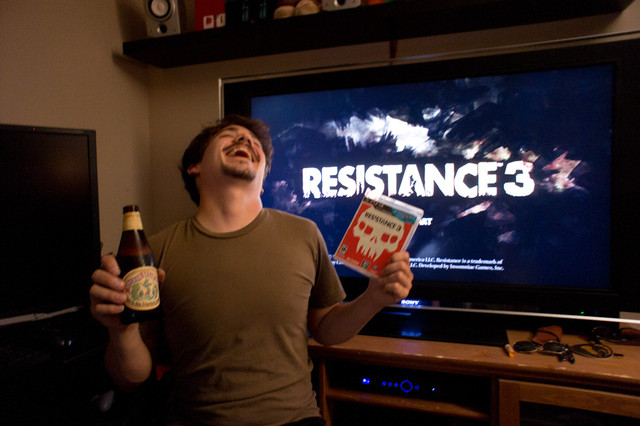 In the Reddit comments, he also responded to a user. The television in the background is 52" in size, and apparently dominates the wall behind him. It's hard not to be slightly jealous of the display he will be enjoying the game on, over two weeks before anyone else will get to play the release title. His feedback is as follows:

“Compared to R2 it is so much better…. graphics, controls, story, difficulty… I am really enjoying it. How it feels and plays is a ton better than R2. It is difficult on normal (more strategic, no run and gun at least in this difficulty). The graphics are dang good too. The game feels very dark and graphically it has a very dark palette. It is also quite intense in some areas. I also enjoy how there are med packs instead of health regeneration! The art direction is pretty cool

I don’t play COD much so I can’t really compare much. Last I played was World at War. This feels similar

To be honest I played a couple hours yesterday but couldn’t really get into it… just wasn’t in the mood. Tonight I am really enjoying it tonight though. I am probably 4 hours in so far and the levels are pretty good. I am currently in a “stealth” area and it doesn’t feel like other stealth games (to me at least).”

Considering that Resistance 2 was regarded as one of the best PlayStation 3 exclusives upon its release, saying Resistance 3 is an improvement still is very high praise. He also explains how he managed to get the game. According to his post on Reddit, a few copies landed in the office, and his boss saw fit to let him grab one of them as he did not play games.

Resistance 3 is scheduled to release on September 6th. The story follows Joseph Capelli, in place of Nathan Hale from the first two titles. It is set in 1957, four years after the events of Resistance 2. The game is promoted under the tagline of "You are the resistance", as a direct reference to civilians being the only opposition in the Chimaeran dominated country. The story will travel from New York City to St. Louis, in Missouri.