It’s common knowledge that security agencies and authorities monitor social networks as part of their routine intelligence gathering, and of course to help inform ongoing investigations. But what exactly are those agencies looking out for? Animal New York has published what it claims is the current list of words and phrases that grab the attention of one such agency, America’s Department of Homeland Security (DHS), based on an internal document released by the Electronic Privacy Information Center (EPIC).

The list is comprehensive, though not exhaustive – the documentation states that the words and phrases listed here are regularly added to as necessary. There are numerous categories into which the list is broken down, including Domestic Security, HAZMAT & Nuclear, Health Concern + H1N1, Southwest Border Violence, and various others. 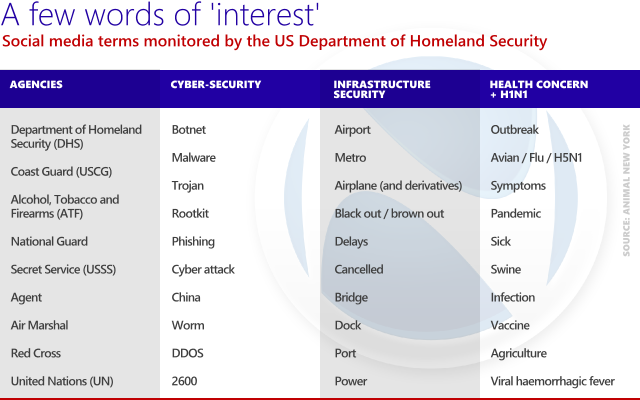 When these phrases are used in social media activities, they are automatically tracked as ‘items of interest’; the account that used the phrases may then be observed for further ‘interesting’ activity, and may be referred to DHS investigators for further scrutiny. In the vast majority of cases, of course, the use of these phrases in social media is wholly benign (you’re probably not going to be thrown in jail for mentioning that you have ‘flu’ for example, which is on the list), and it’s not as if DHS looks into every single use of each of these phrases; rather, they are monitored as part of a much broader range of measures that helps to identify threats and the people behind them.

So, while you're unlikely to be spending any time in Guantanamo Bay for mentioning that you just bought a new ‘watch’, or for mentioning that there are delays on the ‘subway’, or for telling your followers and friends that you got a ‘virus’, using lots of these red-flag phrases in conjunction with each other, and on a regular basis, may well get a bit more attention from the DHS. You have been warned.