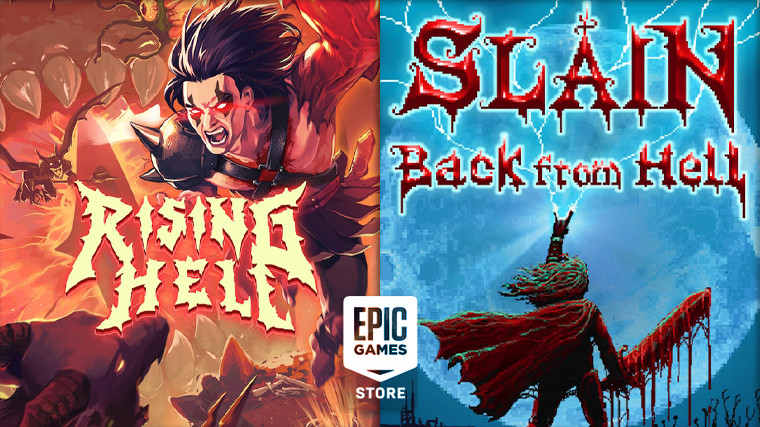 The two game giveaways continue on the Epic Games Store. This week, the company brought in copies of Rising Hell and Slain: Back From Hell as its latest occupants of its freebie slots, which were taken by the previous promotion's Runbow and The Drone Racing League games until now.

Looking at Rising Hell first, the game is described as a vertical platformer roguelite with heavy-metal riffs to keep players charging through enemies. The randomly generated levels in hell must be cleared of enemies and bosses with multiple unlockable characters, featuring different playstyles, available.

The studio Tahoe Games describes its game as this:

Heavy-metal riffs and pixelated madness will accompany you as you fight your way out from the depths of fiery hell, facing the bugs-ridden Beelzebub’s Lair, and other pits of hell with different creatures, bosses, and living traps lurking around. Fight your way through hordes of blood-lusting demons and escape hell as you unlock new characters and talents to create chaos in the randomly generated and ever-changing landscape of hell!

The second hell-themed title of the promotion, Slain: Back from Hell, is also a heavy metal-inspired arcade entry. It touts a whole lot of gore and puzzle elements as you wield elemental weapons and quick timings to vanquish the plenty of bosses the title throws at you.

Here's how the developer Steel Mantis describes the setting:

You control the fate of Bathoryn, a doomed hero in a Gothic world, who seeks to liberate six cursed realms from six deadly overlords. He must battle his way through this blighted land, packed with gruesome pixel art foes before ascending (or descending) into a stronghold, all the while defeating fiendish traps and vile monsters alike.

Picking up Rising Hell or Slain: Back from Hell without a sale would normally set you back $9.99 and $12.99, respectively.

Epic Games Store's Rising Hell and Slain: Back from Hell giveaways will remain active until October 13. Up next on the giveaway schedule is a copy of the classic mash up ToeJam & Earl: Back in the Groove.