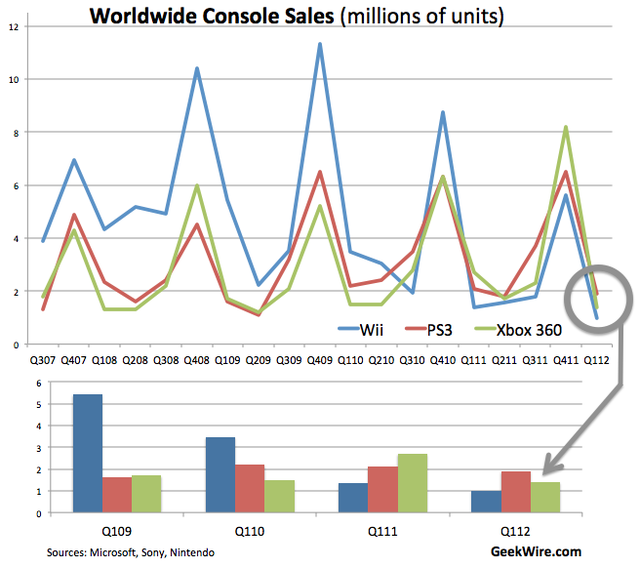 Due to economic problems ongoing during 2012, electronics sales are understandably seeing a decline. Games consoles in particularly are having a hard first quarter of the year, and this can be seen due to the overall decline in sales.

The PlayStation 3 can hold the claim of being the most sold console of Q1 2012, as GeekWire reports, despite a decline in its sale figures. The device sold 2.1 million units during Q1 2011, though this has declined to 1.9 million sales during the same period of 2012.

The Xbox 360 has been dominating the American market, though fighting tooth-and-nail for the rest of the world to maintain its position. In 2011 the Xbox 360 was found to have had more sales than the PlayStation 3, but it would seem that this is being contested again very rapidly.

Microsoft's recent financial results suggest that the sale of Xbox 360 consoles was cut in half. During Q1 2012, a mere 1.4 million consoles found homes across the world. However, this is not as concerning as Nintendo's Wii console, which managed to move less than a million units in the same time frame. The Japanese company will no doubt be relying on the Wii U's release to boost their fortunes again, and propel them back into the big leagues of home consoles.

It would prove very interesting to see whether the reason for the sales decline stems from the cycle of console releases, or if the economy is the main problem. With the announcement of the Wii U, consumers could be holding back on their purchase in case a new Xbox or PlayStation console is also announced.

Microsoft could see an increased uptake of Xbox 360 owners due to their contracted pricing on a 4GB Xbox 360 console with Kinect, at $99. Of course, if the economy is the deciding factor in console sales then there is a reasonable chance that people are simply not buying due to financial constraints.