The iPad 2 is currently available at Apple Stores, Target, Walmart, RadioShack, Best Buy, and Verizon and AT&T stores but rumor has it that Apple's successful tablet will be making its way to Toys "R" Us as soon as next month.

Someone who claims to work at the toy store company tipped modmyi.com off with pictures of training manuals for their employees teaching them about the product and how to sell it to customers. Training pamphlets and manuals are quite the norm right before the launch of a certain product in big box stores. The first picture modmyi was provided with showed what seems like a trivia quiz on the features with which the iPad 2 comes equipped. 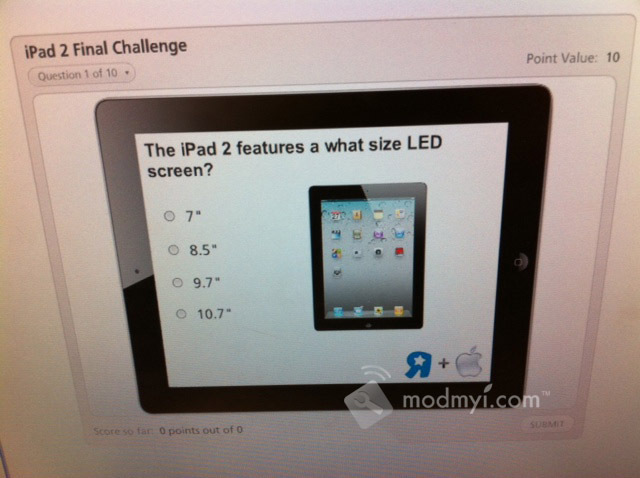 Modmyi received a second picture which showcases the iPad's best features as selling points to consumers. The manual says that Toys "R" Us will also carry the iPad Smart Cover, the iPad Camera Connector Kit, and a VGA connector for the iPad; it also sports the Toys "R" Us logo. 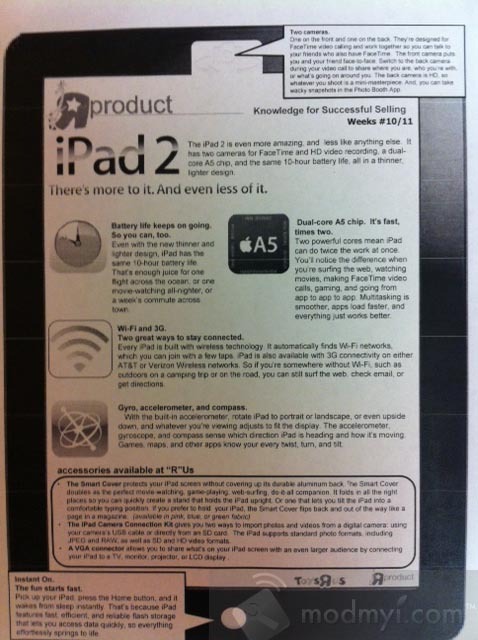 Apple has yet to release exact sales figures for its iPad 2, but all signs point to a successful launch for the company. Consumers lined up in front of Apple Stores when the device first debuted, shipping times were delayed for more than a month, and a student even sold her spot in line for for $900, proving that demand for the tablet had not diminished since its first iteration.