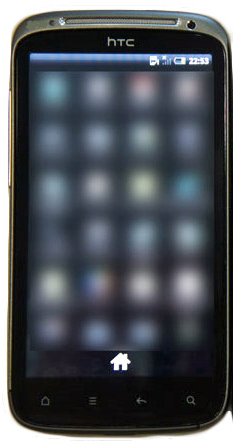 A bevy of leaks have suggested mobile maker HTC's next flagship phone will ship with the next version of Google's Android OS, tentatively dubbed ''Ice Cream''.

GSMArena got its virtual hands on a shot of the HTC Pyramid yesterday, along with some specs that suggest the device will be packing a dual-core 1.2GHz processor, 768MB of RAM, an eight megapixel shooter, the latest version of HTC's Sense UI and Android 2.4. If the leaked specs are correct, the Pyramid would be HTC's first dual-core handset.

While the device appeared to feature a 4.3-inch screen, a closer look by GSMArena apparently revealed an aspect ratio that suggests a qHD (540x960px) screen similar to that found on the Motorola Atrix 4G and Motorola Droid Bionic.

The leak to GSMArena came just a day after Greek site Techblog received an image of the back of the phone showing a design that will likely divide reviewers when the phone is released.

Unofficial T-Mobile blog TmoNews has suggested the phone could hit that carrier in June, though as Android owners know only too well, when (and if) other devices will receive a bump to Android 2.4 will be anyone's guess.

Little is known about what Android 2.4 will bring, though Google chairman Eric Schmidt told an audience at last month's Mobile World Conference Android ''Ice Cream'' would merge smartphone and tablet versions of the company's mobile OS.

''Today I'll use the commonly used names. We have OS called Gingerbread for phones, we have an OS being previewed now for tablets called Honeycomb. The two of them... you can imagine the follow up will start with an I, be named after dessert, and will combine these two,'' he said. Other rumours have suggested that some Honeycomb features will make their way over to the smartphone platform in Android 2.4.

HTC is expected to officially unveil the Pyramid in the next day at the CTIA Wireless expo in Florida.