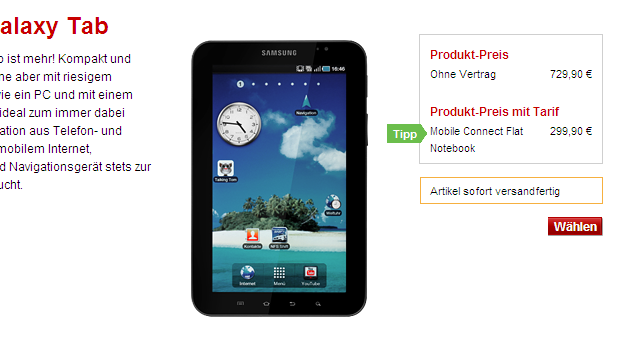 The Samsung Galaxy Tab is the tablet that Android fans have been waiting for since the iPad was announced, and there are a lot of reasons to be excited about it too, especially when you look at its spec sheet.

But like any good product, marketing and the price of the device is key to its long term success, and this is where the Tab sits on shaky ground. While no U.S. prices have been announced yet, European carriers have begun pre-ordering the device and are asking for a serious premium. Vodafone Germany is offering the tab at €730 (over $1000 USD) for a 16GB 3G version off contract or €300 ($400 USD) on contract with a monthly payment of €35.00.

In the UK, the same 16GB tab without a contract is selling for ₤530 ($850 USD) which is around the same price as the iPad (3G model) in the UK. While the tab does offer features the current iPad does not, Samsung is asking the same price as Apple.

If Apple is known for its premium pricing, why isn’t Samsung trying to undercut Apple? Sure, Samsung could be banking on carriers to subsidize the initial pricing to levels well below the iPad, but then you’re stuck with another monthly payment. There is no option for a WiFi only model; it's 3G or bust.

Samsung is taking bold steps with its Tab. It's playing in the market that Apple is dominating and isn't even trying to offer a reasonable out of contract price compared to its iPad competitor. While there are a few out there that won’t buy Apple products and only want true open source, in this case you can’t even compare apples to well, Apple.