Region-locking has long been the scourge of the tech industry for consumers. For those who don’t pirate content and who don’t steal devices – choosing instead to pay their hard-earned money to purchase what they want – it’s something of a kick in the teeth to be told that you can’t then use that device or watch that content that you’ve paid for, thanks to decisions made by manufacturers and rights holders that are largely designed to prevent you from saving a buck or two on your purchase.

More than a kick in the teeth, in fact, it has long been a middle finger from companies to the consumer that’s honest enough to pay for what he or she wants.

So it’s a particularly unwelcome development that Samsung has chosen to begin region-locking its smartphone range. The news, picked up by GigaOM, was first noted by British device retailer Clove, which posted details of “SIM limitations” on Samsung’s new Galaxy Note 3 on its blog. 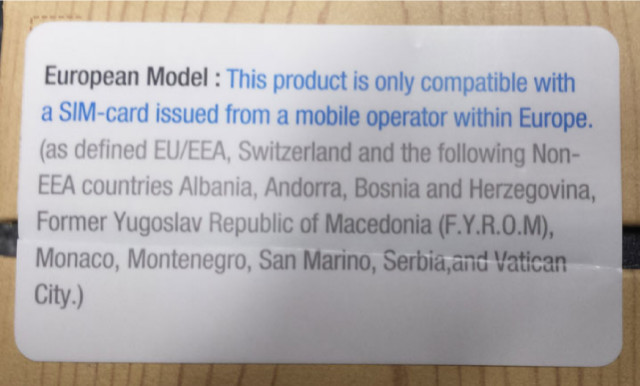 Along with the image above, captured on the box of a Galaxy Note 3, Clove warned its customers:

If you travel internationally (outside Europe) and usually insert a local SIM card when in those countries, the Note 3 will NOT be able to use the local network. It will lose all mobile connectivity with the exception of emergency calls.”

What does that mean in practice? Well, if you buy a Galaxy Note 3 in the U.S. and travel to London, you won’t be able to insert a UK operator's SIM card to be able to use your device at reasonable local pricing. Instead, the handset will reject the SIM card, forcing you to either rely solely on WiFi or to use your ‘home’ SIM instead, along with the exorbitant international roaming rates that carriers delight in charging their customers.

GigaOM's David Meyer noted that Samsung Switzerland is advising customers on Facebook that they will be able to use international SIM cards in the Note 3, but Samsung’s PR reps explicitly confirmed to Meyer that they are indeed region-locking the device, and that this will prevent SIM cards from outside of a handset’s ‘home’ region from working in it. It's not just a European issue either; Samsung's PR people confirmed that the region-locking policy is global and not confined solely to Europe.

What do you think of Samsung’s new region-locking policy? Let us know your thoughts below!