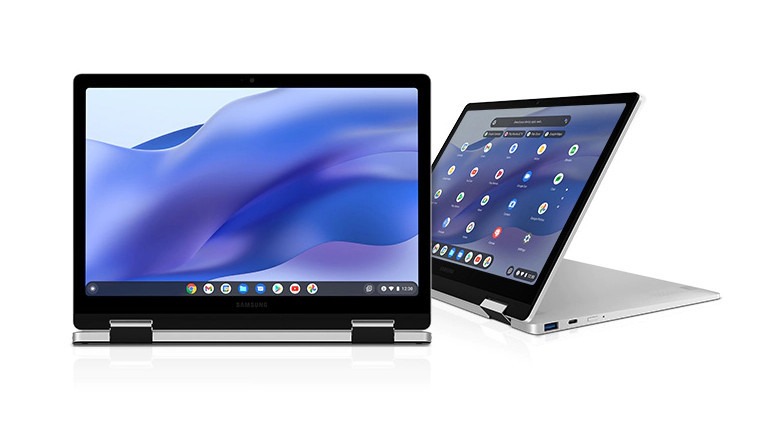 Samsung has unveiled the Galaxy Chromebook 2 360, a 2-in-1 device that it’s pitching to school students who need a sturdy Chrome OS device that doubles up as a tablet. While Samsung says that the product can withstand the unpredictability of student life, at $430, it’s certainly not the most affordable Chromebook which may be a turn off for some parents that are reluctant to spend so much money on a device that’s going to be taken to school where it could get broken or stolen.

Should you decide to pick up this device, you’ll get a bright, high-res 12.4” WQXGA touch screen with a thin bezel that sports a 360-degree hinge allowing you to use the device as a laptop, tablet, or a hybrid between the two. It has a 720p front-facing camera for video calls and there are 64GB and 128GB storage variants, making it suitable for more projects.

The battery on the device should last about 10 hours, getting you through the school day and there's 4GB of RAM which should handle most tasks easily. The processor on this model is the Intel Celeron N4500 which has a 1.1GHz processing speed or 2.8GHz on Turbo Boost mode.

Explaining why the device is ideal for students, Samsung said:

“Samsung Galaxy Chromebook 2 360 is built to be sturdy, durable, and shock-resistant. It’s been tested in a wide range of environments, so it can withstand the unpredictability of student life. Plus, the keyboard is designed for a comfortable typing experience all day long, with a roomy 19mm keycap pitch and a large touchpad.”

If you are interested in buying the Galaxy Chromebook 2 360, you can head over to Samsung’s website now to put in your order. The 64GB model is $430 while the 128GB model is $450. There are also significant discounts that you can get if you have devices to trade in.