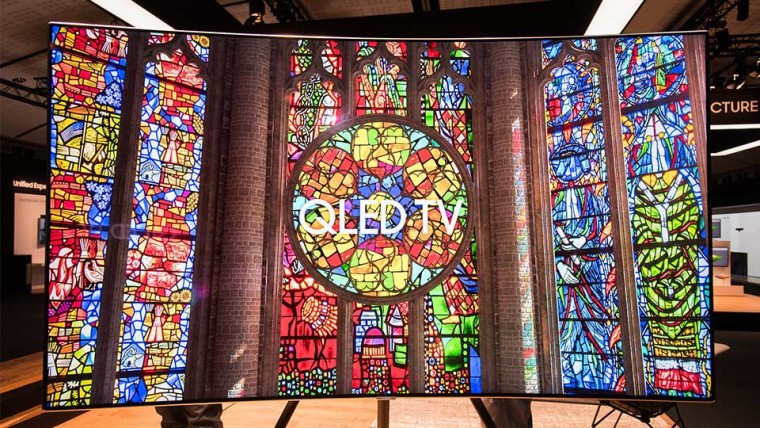 Presented in the “City of Light” at the Louvre Museum, the range of 4K televisions dubbed the “TVs of Light” makes use of Quantum Dot technology.

A QLED (Quantum Light Emitting Diode) panel is considered the next step up in display technology from OLED (Organic Light Emitting Diode). The difference between the two is the fact that the centers of the QLED diodes contain cadmium selenide nanocrystals, or quantum dots. As a result, these allow for better colour reproduction, lower power consumption and the ability to create ultrathin, flexible form factor displays.

True quantum dot displays are still an experimental technology though, with commercial applications that use the QLED denomination merely utilizing quantum dots to convert light in LED-LCD panels.

Samsung’s implementation in this particular case makes use of what’s called a “New Metal Quantum dot”, which is essentially a cadmium-free diode.

This brand-new Q series has three variants: the entry level Q7 which is available in both flat and curved versions: the curved Q8, and flagship flat Q9. Prices in the United States start at $2,799 for the cheapest 55’’ Q7 flat panel, and go up to an eye watering $5,999 for the flagship 65’’ Q9. It is worth mentioning that not all models are available in all markets.

The feature set is consistent across the range, with a few differences reflected on the design side of things. They are:

Moving past these differences, three "consumer pain points" have been outlined by Samsung, which it seeks to address via Q Picture, Q Style and Q Smart.

Q Picture underlines the display’s ability to output High Dynamic Range (HDR) content, with a peak brightness between 1,500 and 2,000 nits, great viewing angles regardless of your position, and 100% DCI-P3 colour volume. The last of these characteristics refers to a 3D representation of a display’s colour reproduction ability throughout its entire range of brightness levels. Regarding HDR in particular, the company states:

Q Style addresses consumers’ annoyance as far as cable management is concerned, with the “Invisible Connection”, a “thin, translucent optical cable that connects your devices to the One Connect at the end”. A One Connect box is in essence an integrated solution to help you get rid of the cable clutter associated with ownership of multiple audio / video devices.

Beyond the Invisible Connection, the QLED TV line comes with a “No-Gap Wall Mount”, which allows the TV to be very easily installed flush with the wall. Adjustments post-install are also very easy to make.

Q Smart evolves the existing Smart TV experience with the Smart Hub and the One Remote Control. The latter allows you to control your TV and most devices connected to it, while integrating voice commands as well.

Last, but not least, The Frame is a TV that doubles as a picture frame. Samsung says:

In Art Mode, The Frame is a beautiful display designed for art. It makes your space more beautiful. It adjusts its brightness depending on the surroundings and shows you the image in its best light. And it has a motions sensor that detects if a room is empty and turns itself all the way off. When you enter the room, it shows your favorite artwork once again.

Of note is the fact that one piece of artwork is included with purchase, the rest are available separately.