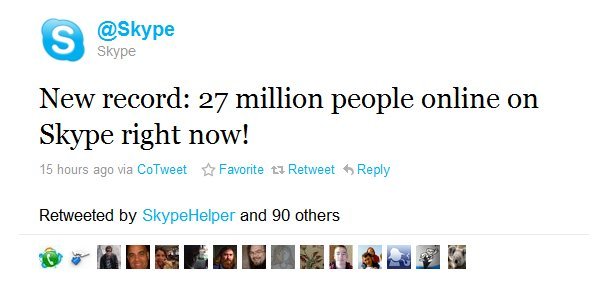 It appears last month's global outage did little to slow the growth of communications service Skype, with the service having hit a record 27 million simultaneous users yesterday.

Gigaom spotted a tweet from Skype's official account announcing the occasion at around 2PM EST. According to the Skype homepage, there are typically up to 23 million users online at peak times and as of 5AM EST today, there were around 21 million users online.

The new record capped off a whirlwind few days for the Luxembourg-based company. On January 6, it announced that new data had shown Skype's share of international calling minutes had grown to almost 25%, bucking a downward trend in international calling. On the same day, it was announced that Skype would acquire popular mobile video provider Qik, furthering a push into the mobile space that was bolstered in late December 2010 with the addition of video calling to Skype's iOS app.

The new simultaneous user record also came just weeks after a massive global outage, later blamed on a specific version of Skype's Windows client which, at the time, accounted for 50% of all Skype users worldwide. After a substantial network recovery effort, the company offered users a US$1 credit by way of an apology for the outage.