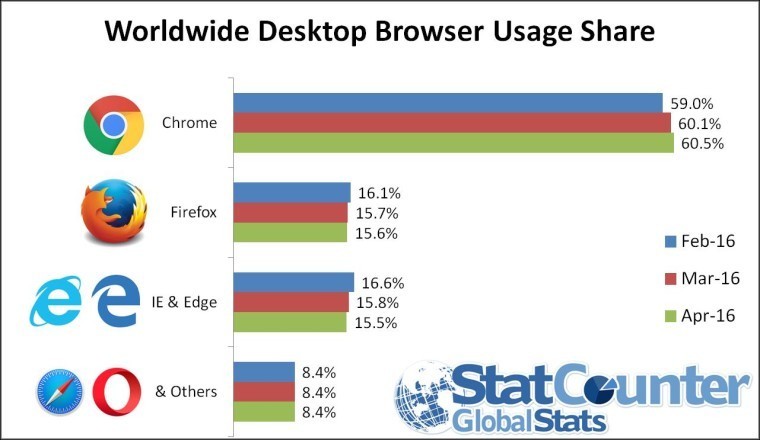 The report, which includes statistics for desktop browser usage during the last three months, shows Firefox at 15.6% and Internet Explorer at 15.5% in April. Microsoft Edge, which replaced Internet Explorer as the default web browser in Windows 10, is grouped alongside its predecessor in the statistics, suggesting that the deprecation of Internet Explorer did not contribute to Firefox's recent achievement.

While Firefox only surpassed Internet Explorer by .1%, the achievement is not the only troubling news for Microsoft's two web browsers, which together represented a group that had seen a consistent decline in desktop usage during the three months. Less popular desktop web browsers, including Opera and Safari, saw no significant change.

Of course, browser market share varies depending on where you get it. For example, NetMarketShare's latest data shows that Firefox isn't even close to the usage of Internet Explorer. Obviously, the two firms use different metrics.

Nevertheless, the news is likely to excite Firefox users, although Google Chrome remains the top desktop browser by all accounts, with an approximate usage share of 60.5% in StatCounter's report—more than triple the amount observed with Firefox during the same period.