Windows 10 is now on over 200 million devices, as Microsoft announced this week. Users of popular gaming client Steam are continuing to adopt Windows 10 at a particularly fast pace. Steam conducts a voluntary hardware survey each month which records the hardware used by its customers. 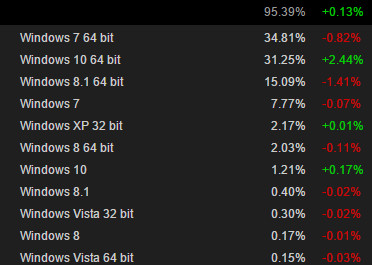 If the trend of Windows 10 upgrades continues, it could very well hit the number one spot on Steam by February, if not sooner. The statistics show that Windows 10 usage is on the increase, especially so amongst PC gamers.

Windows 10 comes with various improvements for people who use their devices for gaming. Developments include DirectX 12, which offers better game performance by allowing further access to the power in the hardware, while also reducing power usage by 50%.