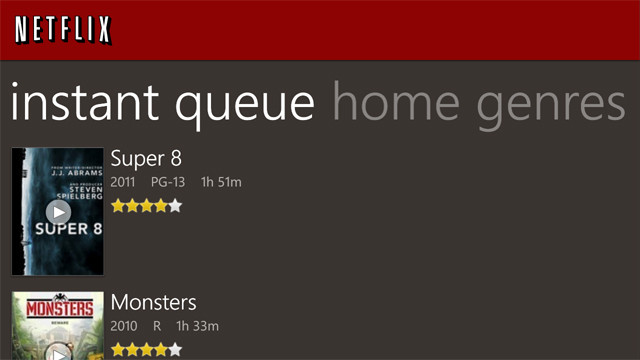 Previously, the Netflix app's interface had a black bar on the top of devices using high-resolution screens with a 16:9 aspect ratio, such as the HTC Windows Phone 8X. With the update, which brings the app to version 3.0.0.1, devices with resolutions of 720x1280 now feature an interface that makes use of the entire screen. Movies and television shows also make use of the full screen now as well. As with Netflix's mobile apps on other platforms, HD streaming is not yet supported on Windows Phone devices.

Other Windows Phone 8 devices, such as the Lumia 920, already featured full-screen movies and interface elements as their aspect ratios matched those of Windows Phone 7 devices, which the app was originally designed for.

The black bar had been the source of many negative ratings in the app's Windows Phone Store reviews. A recent review that gave the app a two-star rating, for instance, lamented the fact that the app didn't "fill up the entire screen on [the] HTC 8X."

No release notes were provided on the Windows Phone Store's listing for the app, though no additional changes were immediately apparent.