Researchers at the University of Missouri have unveiled tiny nuclear batteries that produce power from the decay of radioisotopes. Although such batteries are currently used in devices such as pacemakers and satellites, they are costly, large and heavy - something which these new penny-sized batteries are not.

Developed by a research team led by Dr Jae Wan Kwon, assistant professor of electrical and computer engineering at Missouri University, the team's innovation in creating the battery is not only its size, but its semi-conductor, which is liquid instead of solid.

"The critical part of using a radioactive battery is that when you harvest the energy, part of the radiation energy can damage the lattice structure of the solid semiconductor," Dr Jae explained. "By using a liquid semiconductor, we believe we can minimize that problem."

So what about the risk of nuclear meltdown? There is none. Although nuclear batteries generate electricity from atomic energy, there is no chain reaction involved, instead using the emissions from a radioactive isotope.

"People hear the word 'nuclear' and think of something very dangerous," said Dr Jae. "However, nuclear power sources have already been safely powering a variety of devices, such as pacemakers, space satellites and underwater systems."

The team now hopes to increase the power of the battery, as well as decrease the size of it further - it could be made thinner than a human hair. 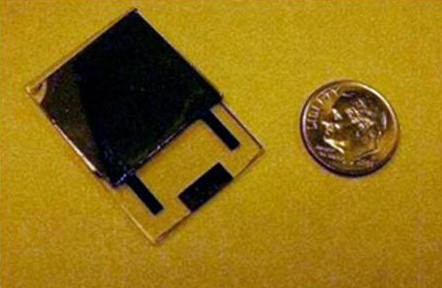