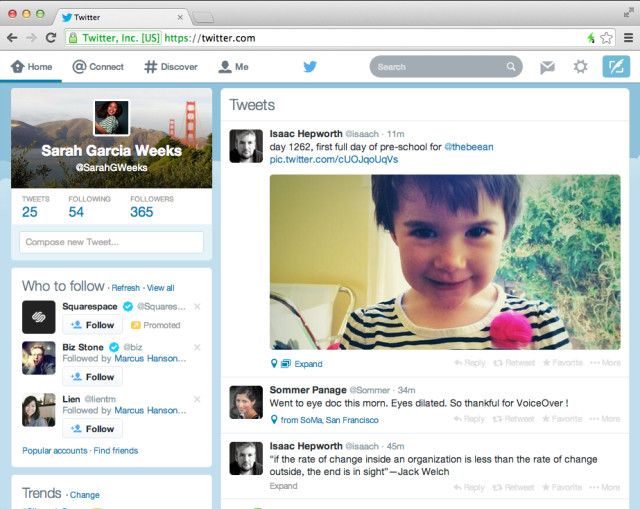 Twitter announced very appropriately via a single tweet that it's rolling out a redesign of the twitter.com desktop website. The redesign aims to take on a more similar look to its updated iOS and Android apps. Indeed, it does a pretty good job of doing just that.

The website removes the dark navigation bar at the top in favor of a clean white one, like in the aforementioned mobile apps. The addition of more vibrant blue colors throughout the website in particular seem to draw from iOS 7's tendency to prefer bright almost neon colors.

The width of the timeline has gotten a bit bigger too, which makes image previews larger. No, unfortunately, it doesn't look like Twitter threw in an option to disable these images from the settings for the desktop website. (You still can't edit tweets yet either.) However, you can still opt-out of them on the mobile apps if you choose to. The left column also now includes your banner image above where you can compose a tweet.

Overall it's a simple update that will bring consistency to the design of Twitter across multiple platforms, a goal that's been apparent within Twitter's team now more than ever. Since it's a rollout, if you haven't received the new look on your account just yet, expect to see it soon.