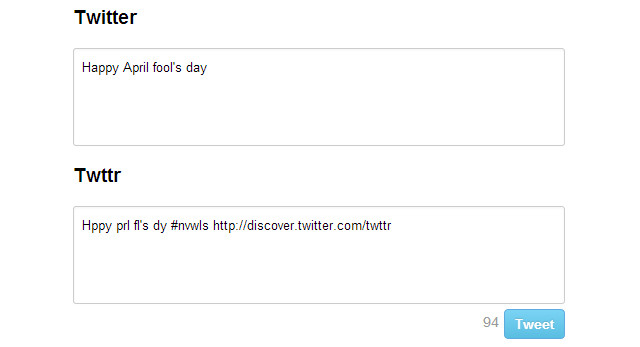 The 140-character limit on Twitter can be a hard obstacle to surmount, but Twitter's April Fools' Day service will ease that burden by automatically removing vowels from tweets while a premium, $5 a month service will allow users to keep vowels.

Kevin Weil (or "Kvn Wl"), director of product for Twitter, announced the new service in a post on the company's official blog. Weil says the new service will help Twitter expand its reach in two important says.

"We're doing this because we believe that by eliminating vowels, we’ll encourage a more efficient and 'dense' form of communication," Weil wrote. "We also see an opportunity to diversify our revenue stream."

In a shocking move, Twitter's allowing users to keep using "Y," however. "Because our users come first, we believe that 'Y' should always be free to everyone — today and forever," Weil wrote. Additionally, Twitter will be adding a new bidding system to allow users to purchase an additional character for tweets, bringing the total to 141 characters. The price of the additional character will come from the bidding system, which determines the most popular characters.

Twttr will be rolling out to users, but those interested in getting the service early can try it out here.