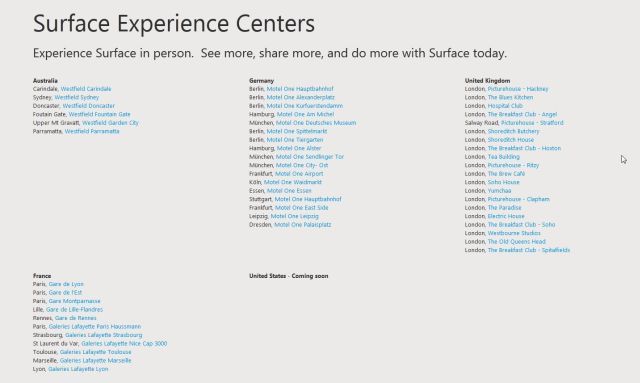 Microsoft announced a few days ago that in lue of actual Microsoft stores, a few select countries would be getting "Surface Experience Centers”. These lounge-like spaces were designed by Microsoft to be areas where interested consumers could come and check out the Surface tablet. A bit later we actually got to see what these spaces will look like.

The original announcement said there would be 54 such centers spanning across France, Germany, Australia and the UK. The US was also present with a “coming soon” sign next to it.

However, something must have happened in the past couple of days because all the UK listings, which were in London anyway, have now disappeared from Microsoft’s site. For comparison check out the screenshot above, which was taken three days ago.

We aren’t very sure why this is happening and Microsoft has yet to comment on the issue. Be sure we’ll keep you updated as soon as we hear something. In the meantime if you live in the UK, you can still buy a Surface tablet, though it might take a while until you actually receive it.

Update: Neowin editor Andy Weir visited one of the sites that had been listed on the Microsoft site, the prestigious Soho House club in central London. Staff and management there told him that they had no idea about why Microsoft had listed them as a Surface Experience Centre, and added that they had not been contacted by Microsoft about it at all.

Still, staff did also say that "many people" had visited the venue today asking about the Surface, so it seems that there is some interest. Microsoft also ran full-cover ads today on the popular Metro newspaper that is freely distributed in many UK cities.