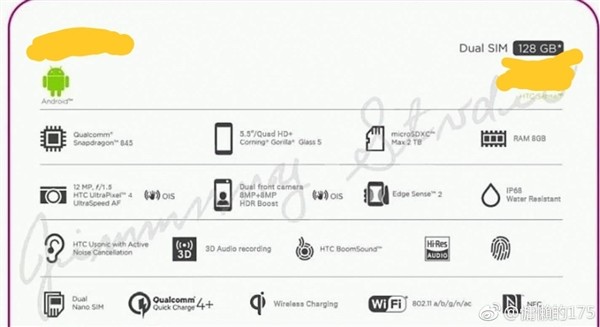 HTC has yet to throw its hat into the ring when it comes to a new high-end smartphone in 2018 but that doesn't mean it isn't coming. There have been numerous leaks over the last few months about an array of U12 handsets that will arrive to market and now we are getting some of the specifications of what could be the top-end model, the U12+.

If the information in the image is correct, the U12+ will have a Qualcomm Snapdragon 845 processor, 8GB RAM, and 128GB of internal storage with room for expansion via microSD. The handset will also have a 5.5-inch QHD+ display protected by Corning's Gorilla Glass 5, a 12MP f/1.5 UltraPixel 4 autofocus sensor, and dual 8MP front-facing cameras. The rear camera specification found in the image at the top of the article is curious, as there have been numerous previous leaks showing the rear with a dual camera setup.

The smartphone will also have the firm's Edge Sense feature dubbed Edge Sense 2, an IP68 rating, and BoomSound. As you might expect, the unit will also feature a fingerprint reader, Quick Charge capabilities, and will also have wireless Qi charging. As of now, there isn't a release date, but hopefully, this handset will debut sooner than later.