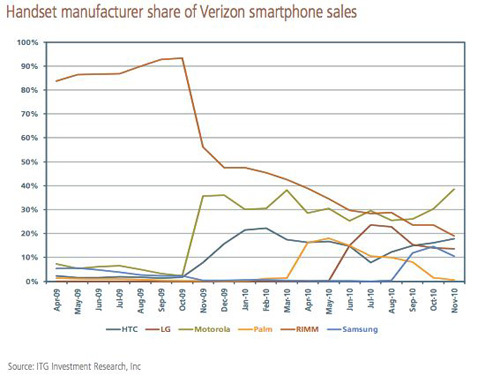 In October 2009, if you wanted a smartphone on Verizon, Blackberry was the only line of products that was worth putting into your pocket. At that time, RIM claimed 90% of smartphone sales and was lackadaisically turning out slight revisions of its devices and pulling in large profits.

But then something happened. Verizon began its Android push, and Blackberry has been in free fall ever since the campaign began. As of Novemeber 2010, Blackberry now owns only 20% of Verizon's smartphone market with the rest being made up of mostly Android devices, according to Electronista.com. Motorola has Verizon to thank for its recovery in the post Razr era as 40% of Android devices sold by Verizon are made by Motorola.

It shouldn't come as too big of a surprise that Blackberry has taken such a massive hit in the consumer space. With an OS that feels older than the Redwood trees in California, Blackberry has fallen behind on what consumers now expect from a modern mobile OS. While it is worth mentioning that OS 6 does give a slightly updated face to the platform, Blackberry has an image issue that it needs to overcome. Also, the new platform is on top of older hardware which tends to keep cutting edge users distant from the platform.