If you have quite a lot of free time on your hands, Humble Bundle has a brand new bundle that should help in putting that time to good use. Arriving with an appropriately lengthy name, the Humble Endless RPG Lands Bundle lets you grab seven games in total for $10, including titles from the highly rated Borderlands series, to the popular 4X game, Endless Legend.

The first tier of games can be bought for whatever price you deem it worthy, giving you the Borderlands Game of the Year Edition, The Incredible Adventures of Van Helsing: Final Cut, and Wurm Unlimited.

Adding to that, paying more than the average cost, that is currently sitting at just over $5, gets you Endless Legend - Classic Edition, which arrives with the soundtrack and some other bonuses; Borderlands 2, that brings along Mechromancer and Psycho additional characters along with level cap increasing DLC; as well as the card-based dungeon crawler, Guild of Dungeoneering.

The game being offered on bundle's final tier, residing at $10 is Borderlands: The Pre-Sequel. The game tells a tale that occurred during the gap between Borderlands and Borderlands 2, featuring a host of familiar characters from the saga.

Humble will stop offering this bundle on October 24, and don't forget to check out the Humble Stardock Bundle from last week, which still has a few days left before closing. 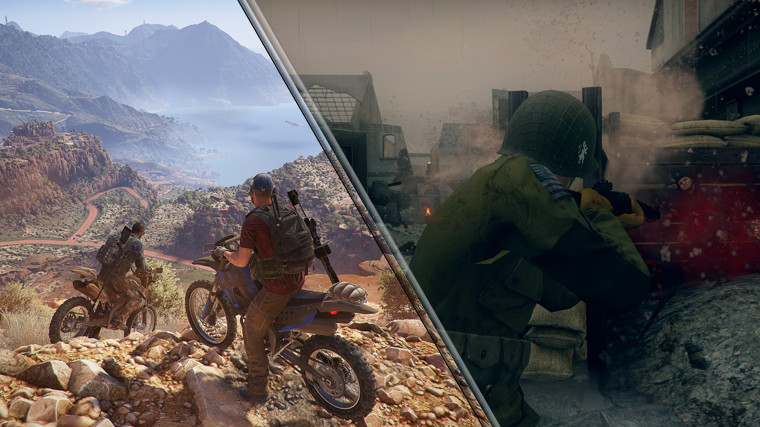 There are five games that are temporarily free to try out this weekend, and the biggest one of the bunch is Ubisoft's open-world tactical shooter, Ghost Recon Wildlands. The free weekend is in celebration of the new Ghost War PVP mode that made an entrance to the game recently. After you've tried the cooperative base game mode, the deathmatch mode could be good a way to take a break.

The free event is available on both Uplay and Steam, with Ubisoft also offering a 50% discount for anyone that might be interested in continuing their playthrough following the event's conclusion.

Up next is another free event for a tactical shooter, but one that is much more hardcore and set in an older era. The game is New World Interactive's Day of Infamy, a multiplayer WWII shooter. If you have played Insurgency by the same developer and liked it, this game will be right up your alley, considering Day of Infamy was first introduced as a mod to Insurgency before being released as a standalone title.

The game offers both player vs player combat and a cooperative mode to tackle. The free event went live just as the game's new Brittany update landed, bringing a new map, UI, and animation improvements, as well as a new tutorial mission to get players ready for battle.

As for the three other games that are also offering free weekends on Steam, they are all indie titles of various flavors. You can choose between Squids from Space, Sentinels of the Multiverse, and INVERSUS Deluxe, or just try them all out if you have the time. We have short descriptions taken from their store pages for all three games, listed below.

Now, with all those pesky DRM-filled games out of the way, let's take look at some DRM-free deals. A host of highly popular games from 2K, Paradox, and Rebellion make an appearance this week on GOG's discounted titles list, and you can find some highlights below.

Also, the store's GOG Connect feature is back, this time giving you DRM-free copies of Torchlight and Torchlight II if you own them on Steam.