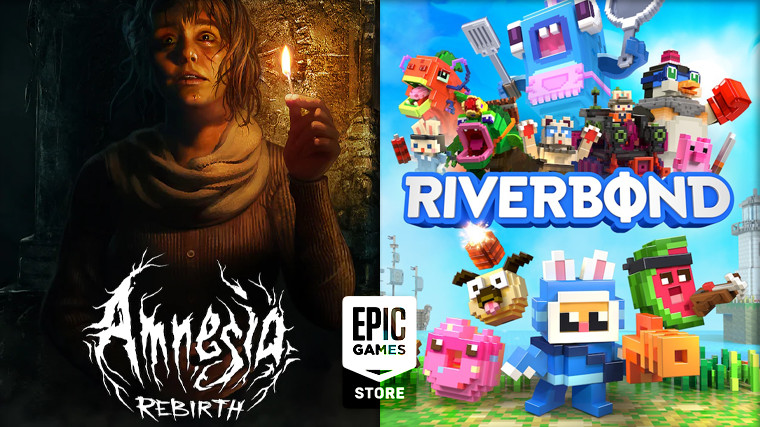 Double giveaways from the Epic Games doesn't seem to be ending anytime soon, as both horror and couch co-op fans are getting a treat this week. Copies of Amnesia: Rebirth and Riverbond are the latest freebies available.

Developed by Frictional Games, Amnesia: Rebirth brought back even more of the studio's standard atmospheric horror and monster chasing elements, and once again following an amnesiac protagonist. Meanwhile, with 4-player cooperative support arrives Riverbond, a voxel-based title involving destructible environments and plenty of adventuring. Only couch co-op is supported, however.

The Amnesia: Rebirth and Riverbond giveaways will last until Thursday, April 28. Coming up next is another double freebie promotion containing Just Die Already and Paradigm.

Humble brought forth its Visual Delight Bundle yesterday, and honoring the name, it carries Townscraper in the base $1 tier. Joining it in the second tier is Labyrinth City: Pierre the Maze Detective and El Hijo - A Wild West Tale.

The remaining final tier bumps up the games count to seven, adding on Rubber Bandits Toem, and Space Crew: Legendary Edition into the pile. You have two whole weeks to make a decision on this bundle.

It didn't end there for bundles, as the space combat and trading sim series 'X' was also a target of Humble earlier in the week. Aptly dubbed the X Universe Collection, it carries base games, expansion packs, and plenty of DLC.

The first tier begins with X: Beyond the Frontier, X: Tension, and X2: The Threat for $1, which are joined by X3: Albion Prelude, X3: Terran Conflict, its X Rebirth plus its Teladi Outpost expansion in the pay the average tier.

The third and final tier comes in at $18, and it touts a copy of X4: Foundations as well as the X4: Split Vendetta expansion. If you missed it, and are a virtual reality headset owner, last week's Must-play VR Bundle is still going strong at Humble too.

This weekend only a single free event populates this space, and that's a returning promotion from last week for The Elder Scrolls Online. The Zenimax MMO is keeping its free-to-play doors open until April 26, offering complete access to the base game and Morrowind expansion content.

The DRM-free side of deals this weekend is filled with brawlers, co-op games, and more: