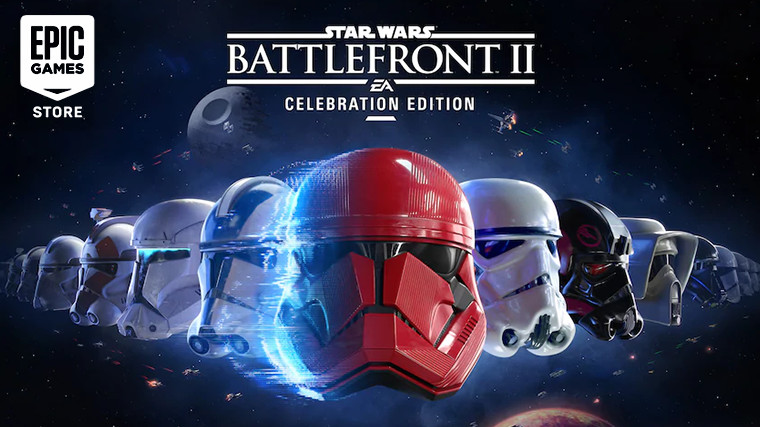 Epic Games Store's latest freebie from its weekly promotion is straight from EA's coffers, with Star Wars Battlefront II: Celebration Edition now available to claim for free. Expect some server issues at the moment thanks to the massive player injection though.

The DICE-developed shooter is from the rebooted Battlefront series. Released in 2017, the title comes with a story campaign set around the time of Episode VI - Return of the Jedi as well as a massive amount of multiplayer content. These include co-op missions, 40vs40 head to head rounds, and starfighter-exclusive matches, among many other modes. Moreover, the Celebration Edition arrives with every cosmetic option released for the title.

The Star Wars Battlefront II: Celebration Edition giveaway will last until January 21, which is when Galactic Civilizations III will arrive as the next freebie.

Freebies don't end there, however, as Humble also kicked off a brand new giveaway to mark its winter sale. The store is giving away copies of Bomber Crew, an FTL-like strategy experience that has players operating a bomber and its crew in WWII. You must manage factors like fuel, ammo, and hydraulics of the bomber while also being wary of flak guns, enemy fighters, weather, oxygen levels, and other dangers.

Keep in mind that Humble's stock of Bomber Crew keys may run out before the giveaway's official end, January 17 at 10AM PST, so it's better to grab one quickly.

There doesn't seem to be any free events happening on Steam, but Battle.net is picking up the slack this weekend. You can try out Call of Duty Black Ops Cold War's Zombies mode until January 21.

The four-player cooperative mode's Die Maschine and Cranked variants are now available to try out, with the former being the standard experience with a multitude of guns to unlock and secrets to uncover, while the latter is a faster-paced mode that adds a twist where you explode if your zombie slaying speeds slows down.

Winter sales were all but over until Humble came through with one of its own. We have highlights from that and much more in our big deals list below for this weekend. Moreover, if you head to the official Bandai Namco store before January 17 you can grab a Steam copy of Little Nightmares for free.

As is usually the case, there are some DRM-free games having sales this weekend also, including a specials promotion just for hack and slash games. Check out our highlights:

And that is it for our pick of this weekend's PC game deals folks, and hopefully, some of you have enough self-restraint to not add even more games to your growing backlogs. Of course, there is an enormous amount of other deals waiting all over the internet if you comb through it hard enough, so keep your eyes open for those, and have a wonderful weekend.

Update: Fixed the Little Nightmares giveaway line. It is the first game that is on offer.