Last month, it was revealed that Windows 10 was being used by 51.2% of Steam users, an all-time high for the operating system. The OS had crossed the 50% milestone at the start of this year, just 17 months after its official launch.

Now, the latest Steam hardware report by Valve indicates that the surveyed Windows 10 user base on the gaming platform has remained more or less constant. 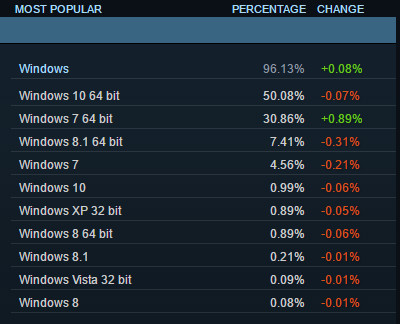 The report notes that 51.07% of the surveyed gamers on Steam are utilizing Windows 10. This consists of 50.08% people who are using the 64-bit version and a measly 0.99% who are currently on the 32-bit iteration of the OS. All in all, this is an insignificant decline of 0.13 percentage points, which is well within the margin of error.

Meanwhile, nearly all other versions of Windows either showed minimal decline or remained stagnant. The 64-bit version of Windows 7 was the only iteration of Microsoft's operating system which sported a considerable 0.89% growth. Overall, Windows usage climbed to 96.13%.

Hardware configurations of surveyed Steam users remained the same as well. 8GB of RAM is still the most-used configuration, and the display resolution for primary displays and multi-monitor setups was 1920x1080 and 3840x1080 respectively.

It is worth noting that Steam's report is based on optional user surveys and it may not accurately depict the real situation. That said, it'll be interesting to see how the release of the Creators Update from earlier this month impacts the aforementioned statistics. The update to Windows 10 packs 'Game Mode', which "optimizes your PC for an improvement in game performance", according to Microsoft.