Windows, like any other OS, has had its fair share of bugs and some of them can be hilarious. It appears to be such a case for a recent glitch noticed by some Insiders who are apparently flighting the latest Windows 11 Dev channel build 22494 that was released a few days back. This visual bug leads to the OS erroneously reporting the full battery capacity of laptops going well past 100%, which is physically impossible, at least with the current technology.

For example, a Redditor named GlitchyDragon65 has posted a screenshot of his desktop on the Windows 11 subreddit with the battery's fully chargeable capacity being shown as 115%. The image also shows that the user is running Dev channel build 22494. 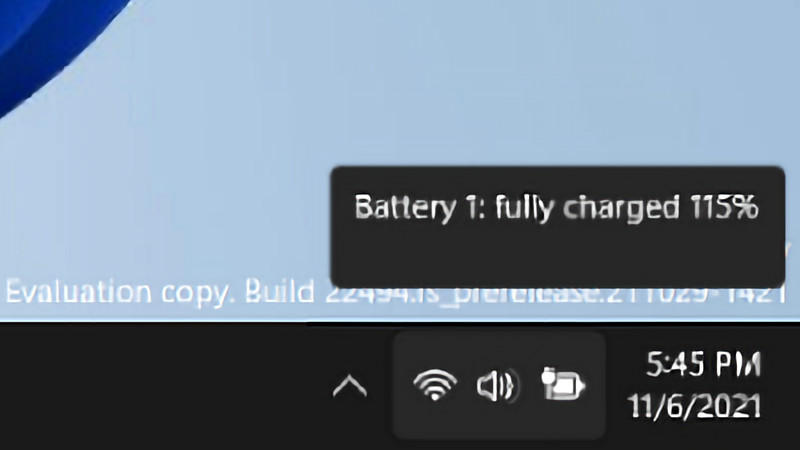 Another Reddit user Zondax, whose post has so far garnered over a thousand upvotes, posted about this earlier on the same subreddit. The first image showed the battery capacity at 103% which increased to 104% later.

Fortunately, though, Microsoft engineer Jennifer Gentleman has noticed the posts and says that the firm is looking into the issue as there have been quite a few reports of this bug. Interestingly, she also confirms that this battery glitch has been present in older Dev builds too and wasn't introduced with the latest 22494 one.

Here's what Gentleman stated in the two posts:

We're looking into it, there have been a few reports across recent dev channel builds.

Dev Channel? If so we're investigating it, there have been scattered reports for a few builds now

It is important to note that these sorts of bugs should be expected in preview builds, especially in the Dev Channel.